Swiss to Vote on Minaret Ban

The people of Switzerland have a unique opportunity this weekend, namely to express their disapproval of Islamic immigration by prohibiting further minaret construction. Will they take advantage of a rare event? We shall see.

Minarets could be banned this weekend as Swiss voters go to the polls for a controversial referendum.

The Right-wing Swiss People's Party argues that the distinctive mosque features are a symbol of Islamic intolerance.

The party has led an emotive campaign to outlaw them. Posters depicting a woman in a burkha in front of minarets shaped like missiles, against the background of a Swiss flag, have been put up around the country.

Ulrich Sch??ler, an SVP parliamentarian and leading member of the anti-minaret movement, says the towers are political rather than religious.

'They are symbols of a desire for power, of an Islam which wants to establish a legal and social order fundamentally contrary to the liberties guaranteed in our constitution,' he said. [Will the Swiss vote for a ban on minarets?, Daily Mail November 25, 2009]

Below, a poster favoring a minaret ban in Switzerland emphasizes how Islam is a threat to traditional western values. 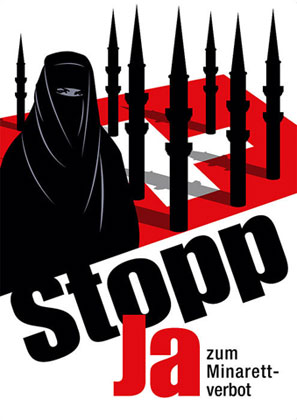