>Americans don’t generally think of themselves as living next to a war zone, but perhaps we should, in light of some figures released recently: in 2016 Mexico was the second most deadly nation on earth, second only to Syria. In that year, Mexico experienced 23,000 deaths from the criminal cartels’ conflicts, which surpassed the body count in some seriously murderous jihadistans like Iraq and Afghanistan to take the #2 spot. 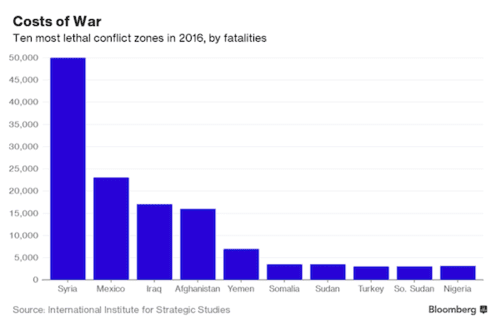 I reported a few days ago about the lack of safety for the reporting class: Neighboring Mexico Is One of the World’s Deadliest Places for Journalists. Now it’s clear that the cartel gang war intramurals have become more intense, endangering the larger population who may get in the way.

Hey, Washington, can we get that border wall built sometime soon? Our neighborhood is looking a lot less safe.

Mexico has surpassed Iraq and Afghanistan to become the world’s second-most deadly conflict zone after Syria, according to a study of wars around the globe.

The number of fatalities from the expanding war among Mexico’s criminal cartels grew to 23,000 in 2016, compared with 17,000 in Afghanistan and 16,000 in Iraq, according to the annual Armed Conflict Survey by the International Institute for Strategic Studies.

That level of bloodshed was all the more surprising, because “Mexico is a conflict marked by the absence of artillery, tanks or combat aviation,” IISS director general John Chipman said in remarks at the survey’s launch in London on Tuesday. Virtually all of those deaths were caused by small arms.

The largest number of fatalities occurred in Mexican states that have become “key battlegrounds for control between competing, increasingly fragmented cartels,” he said, with violence flaring as gangs try to clear areas of rivals so they can monopolize drug trafficking routes.

The Middle East in general and Syria in particular remained the most lethal regions on earth, with the nearly six-year-old-Syrian conflict claiming a further 50,000 lives. That brings the total number of deaths during the civil and proxy war to an estimated 290,000, almost three times the number killed in Bosnia, in the early 1990s.

Sub-Saharan Africa was a relative bright spot, with the number of deaths in war falling by more than a third since last year. Overall, the number of people killed in armed conflicts around the world fell slightly last year to 157,000, from 167,000 in 2015. Yet the figure remains high compared with the previous decade and the number of civilians displaced by war continued to rise, according to the survey.

Chipman and the report’s authors were downbeat about the prospects for reducing these levels of violence on several counts.

One is that conflicts are becoming more urban, with siege warfare increasingly common, according to the survey. That’s especially true in Syria, where that approach proved brutally effective for the regime of President Bashar al-Assad in Aleppo.

A second reason is that as new conflicts emerge, old ones tend not to get resolved but rather subside into a “simmering” state, capable of boiling over again at any moment. Chipman cited Turkey’s more than three-decade-old battle with the Kurdistan Workers’ Party, or PKK, which exploded again last year into an urbanized insurgency that killed 3,000 people. That was the highest annual death count from the conflict since 1997, and a dramatic increase from near peace of recent years. The low-level war in Eastern Ukraine also looks like falling into this “simmering” category, Chipman warned.

A further cause for concern is that even though the Islamic State terrorist organization lost a quarter of its territory and a higher proportion of its fighters last year, the toll on civilians is likely to increase as the group returns to more traditional insurgent tactics, rather than try to hold territory as a conventional army, according to the IISS.

Peacekeeping has become overly ambitious, focused on preventing civilian casualties and peacemaking since the genocides in Rwanda and Srebrenica in the 1990s, rather than just policing ceasefires and political settlements, according to Berdal. The UN is also by its nature too politically riven to carry out effective military operations, he said.

“There are real limits to how you can make a UN peacekeeping force effective,” said Berdal, citing the varied and often poor quality of troops, as well as the UN’s lack of real disciplinary control over them. He recommended the number and ambition of blue helmet missions should be scaled back, and that the UN refocus on the diplomacy of securing political settlements.