Spanish-language media has a strong anti-assimilation agenda based on its own self-interest. If the Mexicans and other hispanic immigrants get pulled into American culture (like speaking English) then Spanish radio and TV doesn’t have a captive audience. So Univision and Telemundo want Mexican newbies to stay tuned in and balkanized.

Spanish media has been one of the biggest promoters of so-called “bilingual” education which discourages immigrant kids from becoming proficient in English, as well as of open borders to keep new viewers and listeners coming. There has been a barrage of propaganda touting the advantages to the brain of being bilingual — but with no comparison to playing chess and studying math, etc.

Americans shouldn’t think of Spanish-language media as merely another expression of the country’s expanding diversity, when it is actually more like a fifth column with unfriendly intentions toward this nation.

When thousands of illegal aliens show up for May Day marches demanding amnesty, part of the organizing comes from Spanish radio and TV which urge unlawful foreigners to complain en masse. In Los Angeles, local Mexican radio guy Piolin is credited with turning out huge crowds of amnesty pests. 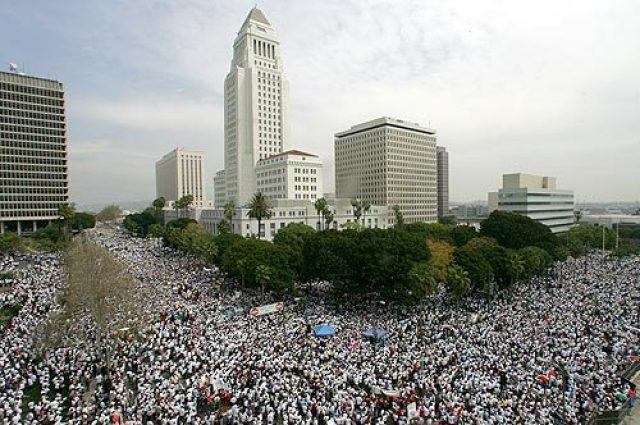 In 2010, President Obama dropped by Piolin’s studio for a little campaign behavior, promising to “punish our enemies” and “stop deportations.” Illegal aliens are an important part of Obama’s base, and he knows how to reach them — through Spanish media.

In a January article about Senator Marco Rubio, media critic Ken Auletta made an aside concerning the power of Univision:

WAR OF CHOICE: Marco Rubio and the G.O.P. play a dangerous game on immigration., The New Yorker, by Ken Auletta, January 9, 2012

The reach of Univision is often underappreciated. It is watched regularly by two-thirds of all Hispanic television viewers in the U.S. In Los Angeles, Miami, Houston, Dallas, San Antonio, and Phoenix, its stations’ newscasts rate higher than those of their English-speaking competitors. Some nights, the network’s national ratings exceed those of ABC, CBS, Fox, or NBC. And the audience is growing, in part because of demographics. Today, fifteen per cent of Americans are Hispanic; in 2050, the percentage will have doubled. According to Univision’s news president, Isaac Lee, the network is openly committed to “pro-Hispanic” immigration reform, and it has a particular slant on the news: a dog biting any man is not a story, but a dog biting a Hispanic man is. Sergio Bendixen, perhaps the leading Hispanic public-opinion researcher in the U.S. and Latin America, says that Univision is the most respected institution among Hispanics in the country, ahead of the armed forces and the Catholic Church. “It is considered to be the institution that protects Latin-Americans in the U.S. and fights the institutions that abuse them,” he says.

Perhaps Univision’s special treatment of hispanic immigrants can be blamed for their high opinion of their achievements in this country which is unsupported by actual performance.

If anything, a recent Washington Times piece describing the power of Spanish-language media understates its influence:

TAMPA, Fla. — For most voters, the Republicans’ nominating convention has been filled with speeches about jobs, the economy, federal spending and President Obama’s record. But for Hispanic voters getting their news from the Spanish-language press, the view is very different — and decidedly unsympathetic to the Republican Party.

Heading into the convention, English-language coverage of last week’s platform fights concentrated on abortion and gay marriage. But Spanish-language reports zeroed in on an immigration battle, which saw Kansas Secretary of State Kris Kobach win passage of a strict enforcement plank in the document.

While the English press this week has wondered about which Republicans would mention Medicare, and who would play the attack-dog role for the GOP, Spanish-language media have been focused on what hasn’t been addressed: immigration.

That is not good news for Mitt Romney, whose position — the strictest enforcement stance of any major political party nominee in history — does not go over well with Hispanic voters.

Meanwhile, Mr. Obama has taken steps, including his recent non-deportation policy, that have helped erase criticism from immigration rights advocates.

Univision and Telemundo, the two dominant broadcast networks, as well as other outlets, put heavy emphasis on education. They extensively cover health care and Mr. Obama’s law, which is poised to extend coverage to as many as 9 million Hispanics.

Hispanics are a growing political force and considered one of the key swing voting blocs.

They also have their own powerful niche press and — given language barriers for those who don’t speak English well — many of them amount to a captive audience for Spanish-language media.

Both presidential campaigns are trying to tap into that audience with outreach ads, and the Republicans have taken steps at their convention this week in Tampa to make inroads as well.

Emilio Gonzalez, former head of U.S. Citizenship and Immigration Services under the Bush administration, who is now a Republican strategist and a consultant to Univision, said the convention is sending a subtle but powerful message to Hispanic voters by featuring so many powerful Hispanic Republicans.

He pointed to appearances from Sen. Marco Rubio of Florida, New Mexico Gov. Susana Martinez, Nevada Gov. Brian Sandoval and Texas Senate candidate Ted Cruz — all Republicans who he said proudly embraced the party’s message of making it on their own.

Indeed, those personal stories resonated with Hispanic delegates to the convention.

“Certainly, I believe that when we listened to the story of Susana Martinez, it touched the heart of many people because this is a hardworking woman who has been able to become the first Hispanic woman as the governor of New Mexico,” said Adryana Boyne, who was part of the Texas delegation.

She also pointed to Mr. Cruz, who told of his father coming from Cuba with $100 sewn in his underwear and a determination not to accept welfare, but to instead make it on his own.

“Just incredible testimonies to let the people know that we don’t need the help of the government, what we need is opportunities,” she said.

Democrats counter that those Republicans have all embraced tight immigration rules that don’t sit well with Hispanic voters. They also say Mr. Romney’s stance is so well-known in the Hispanic community that the question is no longer will Hispanics vote for him, but rather whether he’s permanently damaged the GOP brand.

But Mr. Aguilar said the GOP is not monolithic on immigration, and that battle played out even on the convention stage.

South Carolina Gov. Nikki R. Haley talked about her state’s battle to enact a strict immigration law, which the Obama administration opposed. But on the same stage, former Secretary of State Condoleezza Rice made an appeal for immigration laws that “show that we are a compassionate nation of immigrants.”

Ms. Rice’s remarks were met with steady applause, and Mr. Aguilar said those sorts of moments are beginning to break through.

“It seems to me that the Spanish-language media, I think some are starting to become more aware of the battle,” Mr. Aguilar said. “Some of them are starting to perhaps explain better what is going on.”

He also said Mr. Romney does have a message that could reach Hispanics, if he emphasizes his pledge to take action on reforming legal-immigration procedures.