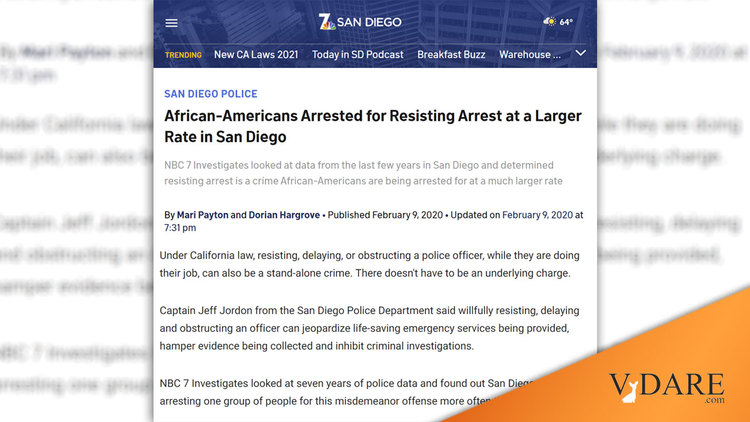 Earlier: NYT Advice For Aspiring Termagants: Scold Anyone You Overhear Asking If The Latest Aspiring/Expiring Rapper In The Headlines Resisted Arrest

… NBC 7 Investigates looked at seven years of police data and found out San Diego police are arresting one group of people for this misdemeanor offense more often than others.

The data shows blacks are 10 times more likely than whites to be arrested for resisting, delaying, or obstructing a police officer.

Last year, 228 people in San Diego were arrested for resisting, delaying or obstructing an officer while they were doing their job.

Breaking that number down: 81 blacks were arrested, 78 Hispanics and 54 whites.

… Bowser said there are reasons why more blacks are arrested for resisting or obstructing a police officer.

“We believe a lot of this plays into the officers implicit bias,” Bowser said. “It’s a culture that is embedded in law enforcement that when they see a black person, they see crime right?”

Bowser said resisting, delaying, and obstructing officers can be abused by police to justify arrests, and it may be a way to lend legitimacy to controversial arrests.

There are also situations in which a person and an officer have different perceptions of what’s happening. If that person responds slowly, or reluctantly, that difference of opinion can lead to an arrest.

Because blacks get arrested for resisting arrest more due to White Supremacy, Implicit Bias, Systemic Racism, etc., that means black should have the right to resist arrest.

In the neo-Calvinism of 2020, we know a priori that God’s favorites are black, so therefore moral (and legal) laws don’t apply to them