Some background: Yale undergraduates live in glorified dormitories known as “colleges.” The incredibly rich university is finally building two new colleges, the first since 1961, after keeping its class size the same for many decades. Yale announced in April that its two new dorms will be named after Pauli Murray and Benjamin Franklin.

Who was Pauli Murray, you may ask?

She is perfect for The Current Year: a Talented Tenth lesbian transgender black studies professor / Episcopalian priest. From Wikipedia:

In 1973, Murray left academia for the Episcopal Church, becoming an ordained priest in 1977, among the first generation of women priests. Murray struggled in her adult life with issues related to her sexual and 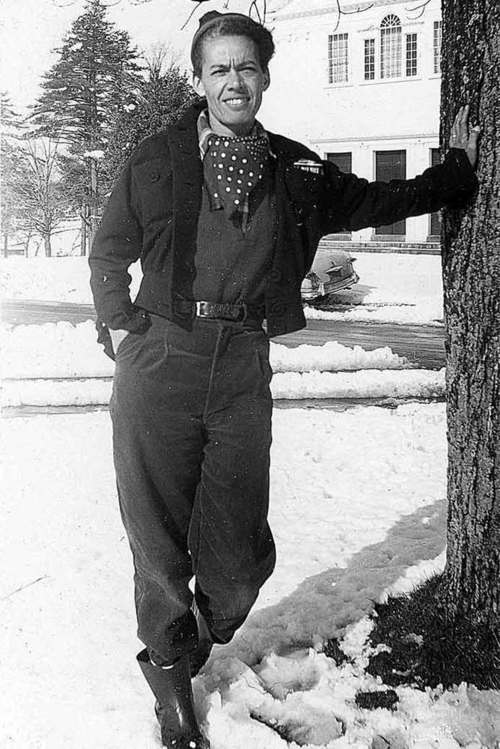 gender identity, describing herself as having an “inverted sex instinct”. She had a brief, annulled marriage to a man and several deep relationships with women. In her younger years, she occasionally passed as a teenage boy. …

Murray struggled with her sexual and gender identity through much of her life. Her marriage as a teenager ended almost immediately with the realization that “when men try to make love to me, something in me fights”.[58] Though acknowledging the term “homosexual” in describing others, Murray preferred to describe herself as having an “inverted sex instinct” that caused her to behave as a man attracted to women. She wanted a “monogamous married life”, but one in which she was the man.[59] The majority of her relationships were with women whom she described as “extremely feminine and heterosexual”.[4] In her younger years, Murray would often be devastated by the end of these relationships, to the extent that she was twice hospitalized for psychiatric treatment, in 1937 and in 1940.[4]

Murray wore her hair short and preferred pants to skirts; due to her slight build, there was a time in her life when she was often able to pass as a teenage boy.[58] In her twenties, she shortened her name from Pauline to the more androgynous Pauli.[60] Murray pursued hormone treatments in the 1940s to correct what she saw as a personal imbalance,[27] and even requested abdominal surgery to test if she had “submerged” male sex organs.[61]

Of course, the highly problematical dorm name is not Pauli Murray, but Benjamin Franklin. From the Yale Daily News:

Student response to the recent announcement that transfers into the two new residential colleges will be randomly placed into either Pauli Murray or Benjamin Franklin college has shown that Yale’s campus is not of one mind on the significance of a college’s name to its community.

When its name was announced last April, Pauli Murray College — which honors civil rights activist and 20th century intellectual Anna Pauline Murray LAW ’65 — became the first residential college named after a woman or a person of color. Under the shadow of a yearlong debate over the name of Calhoun College, the decision to pair Murray with Benjamin Franklin drew condemnation from students who were both confused by the choice to recognize an individual who did not attend the University and disappointed by the Yale Corporation’s decision to honor another slave-owning white male.

But Franklin was still a white male. And that’s what can never be forgiven.

Though the two new colleges are comparable in terms of both size and facilities, their namesakes are different enough that students interviewed disagreed over the relative merits of the two colleges, with some preferring placement in Murray over Benjamin Franklin — a preference that will not be taken into account, per an Oct. 13 email from Yale College Dean Jonathan Holloway regarding the transfer process.

While Holloway acknowledged last week that some students may prefer to live in Murray over Benjamin Franklin, both Holloway and Head of Benjamin Franklin College Charles Bailyn ’81 said Franklin’s legacy makes him a good role model for Yale students.

But of 21 students interviewed, only one told the News they would prefer to be placed into [Bemjamin] Franklin over Murray. Nine students reported a preference for Pauli Murray College, and 11 students reported they would have no preference for either college were they to transfer. Furthermore, as the placement by lottery in the new colleges will be nonbinding, some students told the News they would opt out of the transfer process if placed into Benjamin Franklin.

“If it turns out that some people, when they discover they are in Franklin rather than in Murray, are unhappy about that, part of my job is to talk them into it,” said Bailyn, a professor of astronomy and physics. “I hope that we would be able to persuade people that it is going to be a really exciting experience whichever college you end up in.” …

Yet many students who said they favor Murray College over Benjamin Franklin College pointed to the importance of Murray’s identity as the primary reason they would want to join the college.

“She is an important figure for visibility for queer women of color, and I think that’s important for Yale, more so than Franklin, who is similar to a lot of the other honorees of other buildings and Yale events,” said Sara Harris ’19.

Yale has not had to deal with the issue of transfers to new residential colleges since 1961, when upperclassmen helped fill in the ranks of the newly opened Ezra Stiles and Morse colleges. But despite the familiar position, the controversy over placement preference is new.

Richard Holbrook ’63, who transferred from Saybrook into Morse in 1961, said he never encountered anything similar to the current naming complexities surrounding the new residential colleges.

“I just thought it would be interesting to join the new colleges. I didn’t have any preference whether it was Morse or Stiles,” said Holbrook. “I think we were just out to try something new and expand our acquaintanceships among other students.”

Yale’s cultural climate and the issues pertinent to the student body have shifted since the early 1960s.

“In those days, of course, there were just men in the colleges … We didn’t have girls, so the whole subject [of social issues] began 10 years later,” said David Rosenberg ’63 LAW ’73, who transferred into the newly founded Morse College from Davenport College. He added that transferring into Morse entailed a “straightforward, simple application process.”

Rosenberg noted that although he had been “perceived back then as very liberal, almost radical, for Yale terms,” due to his involvement in the 1961 and 1962 sit-ins in the American South, he said that as an older alumnus he was “oblivious” to the current naming controversies surrounding Benjamin Franklin College.

Part of the controversy stems from the fact that Charles Johnson ’54, who in 2013 donated $250 million toward the construction of both new residential colleges, requested that one college be named Benjamin Franklin out of his own admiration for Franklin.

Similarly, the single student interviewed who said he would prefer to be placed in Benjamin Franklin cited the Founding Father as a role model.

“I personally regard Franklin as one of my role models in many ways, [as] he is a historical figure that I really respect, and, to be honest, I don’t know that much about Murray,” the student, who asked to remain anonymous, said. “I don’t know too much about the controversy. I wasn’t here last year. I was in the military and I just came back, so I’m one of the unusual cases.”

Current students said they would rather be in Murray to avoid the emotionally taxing dialogue about slavery, racism and naming they expect will happen regularly in Benjamin Franklin.

After all, what did Ben Franklin ever do for America?

P.S., this Charles B. Johnson who gave a quarter of a billion dollars to build these two dorms and had the racist insolence to ask to have one named after Ben Franklin is your classic college donor: a straight white male Republican jock veteran alumnus. From Wikipedia:

Johnson attended Montclair High School, and then Yale College, where he graduated in 1954. At Yale he played offensive guard for the football team and waited dining hall tables as a scholarship student. An ROTC cadet, he later served as a lieutenant in the United States Army stationed in Germany.

With his brother Rupert Johnson, Jr., Charles served as Chairman at Franklin Resources, a mutual fund company started by Rupert Sr. in 1947. Johnson is currently principal owner of the MLB San Francisco Giants…

Johnson is one of his alma mater’s largest benefactors, having given considerable sums to athletic and student facilities at Yale. Johnson Field, used for field hockey, was opened in 2001. In 2005, he was the principal donor to a renovation of the Yale Bowl. Johnson has also funded academic programs, including the Johnson Center for the Study of American Diplomacy and Brady–Johnson Program in Grand Strategy.

In September 2013, Yale President Peter Salovey announced that Johnson had given $250 million to support the construction of two new residential colleges costing $400 million. The gift was the largest in Yale’s history in nominal terms. One of the new colleges has been named for Benjamin Franklin, a personal hero of Johnson’s whose name is borne by the family investment firm. This decision has been met with criticism by some Yale students, as Benjamin Franklin, who owned slaves, neither attended nor taught at Yale.

Johnson is one of the largest donors to Republican and Tea-Party-backed political campaigns. Since 2000, he has contributed over $900,000 to the campaigns of Mitt Romney, John Boehner, and Ben Quayle. In 2015, Johnson donated $1 million to a Super PAC supporting the presidential candidacy of Jeb Bush.

That’s the problem with Deplorables: you tell them over and over that you hate them for being who they are, and then they still turn around and give you $250,000,000.00.
[Comment at Unz.com]