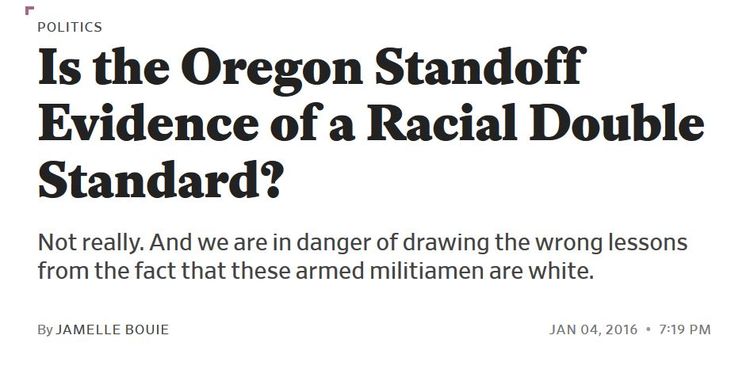 Jamelle Bouie is a black columnist for Slate who, like most black columnists, specializes in calling people racist. However, unlike many other columnists, Bouie at least seems capable of reading the arguments of the people he's denouncing. And today, Bouie holds a unique spot among liberal journalists by suggesting a bloodbath isn't necessarily the best response to the occupation of a government building.

It’s not just that these are different organizations—local and city police forces versus the FBI and other federal agencies—and different kinds of confrontations with different procedures, but that there’s also a different history involved. Confrontations at Ruby Ridge and in Waco, Texas ended with scores of dead (white) civilians, and inspired the Oklahoma City bombing—the deadliest terrorist attack on American soil prior to Sept. 11, 2001.

Law enforcement has been willing to use lethal violence against armed white protesters and the results were catastrophic. It’s no surprise federal agents are cautious; they walk with the hard-learned lessons of the 1990s. Even if the Bundys are paper tigers, no one wants to relive the past. In that, law enforcement officials are correct.[Is the Oregon Standoff Evidence of a Racial Double Standard? January 5, 2016]

One thing Bouie does not bring up though is that occupations by black protesters with guns is hardly new. Eric Holder reportedly participated in an "armed" takeover of a ROTC campus in the 1970's. No one was prosecuted [As college student, Eric Holder participated in 'armed' takeover of former Columbia University ROTC office, by Charles C. Johnson and Ryan Girdusky, Daily Caller, September 30, 2015]
The Black Panthers famously marched into the California state capitol while armed. Then governor Ronald Reagan and the state legislature responded by passing legislation against carrying weapons, but the state police didn't shoot the protesters as they marched into the capital [State Capitol March, A Huey P. Newton Story, PBS, Accessed January 5, 2016].
There have also been some armed Black Lives Matter protesters, reportedly including the same African-American man who would later be kicked out of a Trump rally for creating a disturbance [Alabama demonstrators show residents black lives, guns matter,  by Jennifer Cruz, Guns.com, October 20, 2015].
The closest thing I can think of to an urban version of Waco would be when law enforcement bombed an apartment complex in Philadelphia in effort against the activist group MOVE many year ago, an incident reminiscent of the attack on the apartment complex during the beginning of Dawn of the Dead  [Why have so many people never heard of the MOVE bombing? by Gene Demby, NPR, May 20, 2015]. But it's simply untrue to say if the Oregon protesters were black, they'd be dead. In most of these cases, the protesters went on to be remembered as heroes by the Main Stream Media. In Holder's case, he went on to be the top law enforcement official in the country.
#OregonUnderAttack? Not exactly. And the people crying for a crackdown seem to have more bloodlust than these protesters in Oregon.