From a new paper, The Origins of Gender Roles: Women and the Plough (Preliminary) by Alberto Alesina, Paola Giuliano, and Nathan Nunn, we find an ethnographic map of cultures as of, say, 1491, that farmed with plows (red dots) versus those that did not (green dots, which lumps together hunter gatherers, herders, and farmers who used hoes or other means to weed). From Murdock's Ethnographic Atlas (click graph to enlarge): 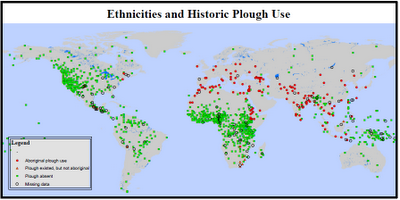 The subject of the paper is gender roles in the modern world: today, all else being equal, women from old plow cultures are less likely to be employed outside the house than women from hoe cultures, just as women do most of the agricultural work in hoe cultures like sub-Saharan Africa and New Guinea. The authors don't mention this but one example is that in the inner city neighborhoods depicted on The Wire, women hold most of the paying jobs, just as their foremothers did most of the farm work in West Africa.

But the obvious thing that jumps out at you from the map is the high correlation between plowing and level of civilizational accomplishment (at least as measured in impressive ruins and buildings). The Taj Mahal, for example, is found in a plow culture. The ancient and medieval churches of plowing Ethiopia are a lot more impressive than the big pile of loose rocks that is the chief monument of Zimbabwe.

Of course, one causal connection between gender roles and civilizational accomplishment is that you can get more done if men work harder, as they tend to do in plow cultures. We don't think about that today, because we're supposed to think that the big issue is: "Why don't those evil men let women work?" In Africa, however, feminist organizations complain about the opposite problem: How do we get men to do more of the work?

The hypothesis tested in this paper is whether at least part of the current differences in gender role attitudes arose from the historic mode of agricultural production - e.g., plough agriculture, hoe agriculture, shifting agriculture, etc. - which in turn affected the gender division of labor historically and the subsequent evolution of norms about the natural role of women in the family and society. Ester Boserup (1970) originally put forward this hypothesis in her seminal book Woman’s Role in Economic Development. She argued that to understand cross-cultural differences in attitudes about female labor force participation, one needs to reach back into history and examine differences in primitive agricultural technologies. She contrasts shifting cultivation to plough cultivation. With shifting cultivation, which is labor intensive and does not use the plough, women do most of the agricultural work. By contrast, plough cultivation is more capital intensive, but also requires more strength to manipulate the plough and the animals that pull the plough. Therefore, in plough societies men tend to dominate agricultural work, while women primarily engage in home production and other activities that occur within the household. Boserup (1970) writes that plough cultivation ”shows a predominantly male labor force. The land is prepared for sowing by men using draught animals, and this. . . leaves little need for weeding the crop, which is usually the women’s task. . . Because village women work less in agriculture, a considerable fraction of them are completely freed from farm work. Sometimes such women perform purely domestic duties, living in seclusion within their own homes only appearing in the street wearing a veil, a phenomenon associated with plough culture and seemingly unknown in regions of shifting cultivation where women do most of the agricultural toil” (Boserup, 1970, pp. 13—14)3. In plough societies, a gender division of labor both in the field and in the family becomes predominant. Because women specialize in work in the domestic domain, the home comes to be seen as the ”natural” place for women, rather than outside the home in the fields or in the workforce. Interestingly enough, Boserup maintains that this division of roles persisted even after a country moved out of agriculture: factory work appears to be avoided by married women in many part of the developing world and there is considerable evidence that this social norm is widely accepted.

You can also get bigger things done if men don't spend most of their energies competing with each other to mate with the most women. Anthropologist Peter Frost blogs at Evo and Proud about traditional societies where women do most of the farm work:

The polygyny rate varies considerably among human populations, being highest (20 to 40% of all sexual unions) in the agricultural societies of sub-Saharan Africa and Papua-New Guinea.

Such high rates have consequences. ...

In my last post, I noted that high-polygyny societies remain simple in large part because intense sexual competition keeps them from evolving into more complex entities. The surplus males stir up endless conflict, if only because war provides them with access to women, i.e., through rape and abduction. ...

This is not to say that a high-polygyny society cannot evolve into a low-polygyny one. It can, if the material conditions of life change. We see this happening as Africans move off the land and into cities and towns, where women can less easily feed themselves and their children without assistance (1). Urban African men are less likely to be polygynous because it costs them more to provide for a second wife.

This in turn has shifted the pressure of sexual competition from men to women. It is increasingly the woman who must compete to find a mate. Whereas before she only had to work hard at tending her plot of land, she must now invest in her physical appearance, notably by lengthening her hair and bleaching her skin.

This new mating environment is described by Fokuo (2009) with respect to Ghana. Traditionally, Ghanaian women were married off through family mediation and bride price. This situation has changed since World War II and especially since the 1980s. They now largely find mates on their own, and do so in an increasingly competitive market that pressures them to be as sexually attractive as possible. One result has been the spread of skin bleaching:

By the late 1980’s and 1990’s, skin bleaching was no longer practiced by prostitutes. The popular culture of the 1980s praised lighter skin tones. This praise encouraged the spread of skin bleaching across gender lines and throughout all socio-economic classes of women. (Fokuo 2009)

Interviews with Ghanaian women suggest that this practice is driven by a competitive marriage market:

Sometimes if you really want to marry a particular man, you have to bleach.(Interview 14, 2006)

Lighter-skinned women tend to attract more men by virtue of their lightness. So if they are at marrying age they get more men coming to court them earlier and quicker than darker-skinned women. (Interview 16, 2006)

Darker-skinned women look at themselves and realize that they need to bleach to be beautiful. Just so men can call them beautiful. (Interview 17, 2006) (Fokuo 2009)

This shift to ”bodily commodification,’ together with the decline of matriarchy, is deplored in the literature. Yet the consequences are not entirely negative. Matriarchy meant that African women bore a very disproportionate share of labor in raising their families, especially physical labor. Today, there is a move toward a more equal balance of parental investment between African men and women. And bodily commodification is perhaps a necessary precondition for much of what we call ”high culture,’ i.e., the pursuit of the aesthetic.

In the 1960s in Northern cities, higher welfare for single mothers, allowing them to support their children without a husband (a policy that had worked in Sweden for a generation without disaster), appears to have caused a remarkably quick reversion among many poor African-Americans to sub-Saharan cultural tendencies, but without the traditional restraining structures of African village life.