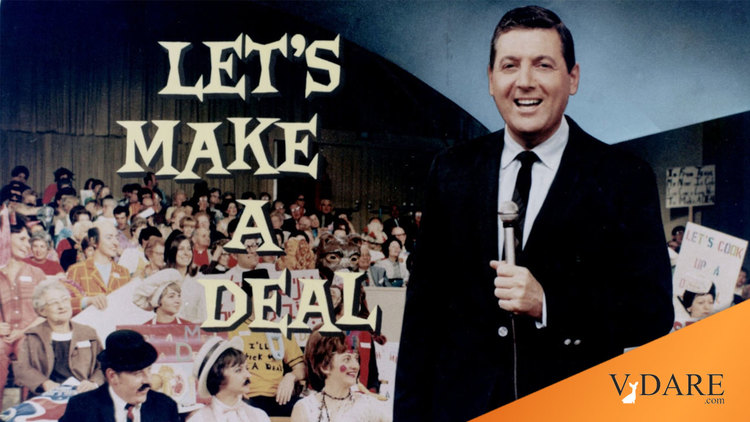 From the New York Times Science section in 1991:

Mr. [Monty] Hall [host of Let’s Make a Deal] said he was not surprised at the experts’ insistence that the probability was 1 out of 2. “That’s the same assumption contestants would make on the show after I showed them there was nothing behind one door,” he said.

“They’d think the odds on their door had now gone up to 1 in 2, so they hated to give up the door no matter how much money I offered. By opening that door we were applying pressure. We called it the Henry James treatment. It was ‘The Turn of the Screw.’ ”

Mr. Hall said he realized the contestants were wrong, because the odds on Door 1 were still only 1 in 3 even after he opened another door. Since the only other place the car could be was behind Door 2, the odds on that door must now be 2 in 3.

Sitting at the dining room table, Mr. Hall quickly conducted 10 rounds of the game as this contestant tried the non-switching strategy. The result was four cars and six goats. Then for the next 10 rounds the contestant tried switching doors, and there was a dramatic improvement: eight cars and two goats.

A pattern was emerging.

“So her answer’s right: you should switch,” Mr. Hall said, reaching the same conclusion as the tens of thousands of students who conducted similar experiments at Ms. vos Savant’s suggestion. …

After the 20 trials at the dining room table, the problem also captured Mr. Hall’s imagination. He picked up a copy of Ms. vos Savant’s original column, read it carefully, saw a loophole and then suggested more trials.

“But you didn’t open another door yet or give me a chance to switch.”

“Where does it say I have to let you switch every time? I’m the master of the show. Here, try it again.”

On the second trial, the contestant again picked Door 1. Mr. Hall opened Door 3, revealing a goat. The contestant was about to switch to Door 2 when Mr. Hall pulled out a roll of bills.

“Three thousand dollars,” Mr. Hall repeated, shifting into his famous cadence. “Cash. Cash money. It could be a car, but it could be a goat. Four thousand.”

“You just ended up with a goat,” he said, opening the door.

Mr. Hall continued: “Now do you see what happened there? The higher I got, the more you thought the car was behind Door 2. I wanted to con you into switching there, because I knew the car was behind 1. That’s the kind of thing I can do when I’m in control of the game. You may think you have probability going for you when you follow the answer in her column, but there’s the psychological factor to consider.”

Was Mr. Hall cheating? Not according to the rules of the show, because he did have the option of not offering the switch, and he usually did not offer it. …

Which means, of course, that the only person who can answer this version of the Monty Hall Problem is Monty Hall himself. Here is what should be the last word on the subject: “If the host is required to open a door all the time and offer you a switch, then you should take the switch,” he said. “But if he has the choice whether to allow a switch or not, beware. Caveat emptor. It all depends on his mood.

You know, people who are massively successful at their jobs, like Monty Hall, Bob Barker, and Alex Trebek, tend to be pretty sharp about their jobs.