If there's any doubt that slavery has returned to America, check out the wages and working conditions for illegal alien carwasheros in Los Angeles. Naturally, corrupt, anti-American unions want to organize these workers, rather than insist on their deportation—a policy that would aid citizen workers and the country at large.

That first day the organizers came, Varela's insides churned with worry. He was terrified at the thought of losing this job. But he felt his boss owed him—all of them—more than the $3 to $4 an hour they typically were paid. He would see what this union meeting was all about.

Month after month, at Wednesday-night meetings in the Pico-Union area, Nary's workers sat among dozens of carwasheros who'd straggled in after work from all over Los Angeles. Like the Nary's workers, these men were being paid $40 a day — or less — for up to 12 hours of work. They said their bosses threatened and screamed at them.[At L.A. carwashes, taking a stand, By Sonia Nazario, Los Angeles Times, March 27, 2008]

Below, demonstrators protest the wages that "carwasheros" receive at a workplace in Los Angeles. 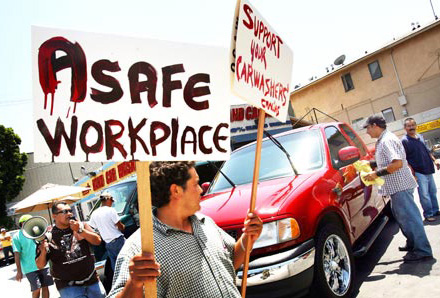 Today's illegal alien employers often pay wages that cannot support the most minimal standard of living. But taxpayers are forced against their will to make up the difference, by paying for food stamps, healthcare, housing vouchers, education for illegal kiddies through college and whatever else illegal advocates can successfully finagle. This is how slavery in America has "progressed" between 1850 and now.

For a reminder of when Americans did those jobs, see the trailer for the 1976 blaxploitation movie, Car Wash.