The most interesting storyline going into the 2012 Olympics is whether the American long sprinter Allyson Felix will finally give in and go over to the dark side in her pursuit of individual gold. She had to settle in 2004 and 2008 for silver medals in the 200m, losing each time to Jamaican women with biceps twice the diameter of hers.

Felix is the 21st Century black female version of the old Chariots of Fire Olympians: a well-spoken minister's daughter from the nice middle class black suburb of L.A.. She's just really fast. She turned professional right out of high school, so she couldn't run college track, but still got her U.S.C. degree quickly. It's easy to picture her as a high school principal some day. Corporate America would love to give her lots of money, if she'd only win individual gold. So, I imagine, there's a lot of pressure on her to Do What It Takes. Americans love a winner.

And, at the 2011 world championship (pictured above), Allyson lost in the 400m by 0.03 seconds to a Botswanan with massive biceps. The NYT has an admiring profile on the Botswanan runner today:

but haven't we learned 24 years after Ben Johnson that huge arm muscles in a sprinter are a dead give-away? Here's the picture splashed by the Times: 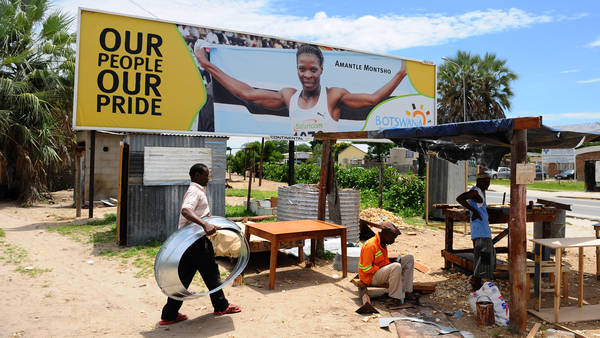 I went to the 1984 Olympics at the L.A. Coliseum and saw an NFL receiver's wife with massive arms edge out a skinny Florence Griffith-Joyner for gold in the 200m. Then Flo-Jo lost the 1987 world championships to an East German with big arms. So, she showed up in 1988 looking like Wonder Woman, and set all the records, which still stand. She died in 1998.