From the Los Angeles Daily News: 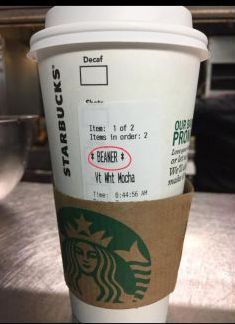 Starbucks is investigating after a customer at a La Cañada Flintridge store said he received two coffee cups with the word “Beaner” – a derogatory term for Mexicans – printed on them in place of his name this week.

A term much used on Cheech & Chong albums 45 years ago, although I’m not sure how much since then.

A Starbucks spokeswoman, in a voicemail on Thursday, said that “this kind of mistake is unacceptable” but would not elaborate in a follow-up email on on why she believed it was a mistake. She said the company is taking additional steps to determine what happened and how their employees “can be better.”

… The customer, a Latino immigrant named Pedro, confirmed to the Daily News Thursday that Starbucks spoke with him and asked for forgiveness.

“It’s not good what they did, but they have spoken with me,” he said in Spanish, declining further comment.

Tuesday’s incident comes as Starbucks plans to close more than 8,000 of its company-owned stores across the country on May 29 to conduct “racial-bias” training in an effort to prevent discrimination at its stories. …

But Los Angeles County sheriff’s Lt. Gary Harman indicated the incident may not have been an intentional slur. Employees of the Starbucks in La Cañada Flintridge told authorities that the barista believed a Latino customer had identified himself as “Beaner,” and thus placed the term on his coffee cup Tuesday. …

“It doesn’t appear to us – at first look – that there was any intent,” he said.

It was not immediately clear, however, how the name Pedro could have been mistaken for the word “beaner.”

Maybe the guy translated “Pedro” to “Peter” with a thick accent? Or maybe the barista isn’t very competent with English?

Harman noted that the barista herself is reportedly Latina.

This detail from the original source newspaper isn’t much being mentioned in all the voluminous national coverage.

The barista, after taking the order, entered the name into the computer. The name came out on a receipt that was placed on the cup.

Under the general heading of Hate Hysteria, we can distinguish a couple of categories: Hate Hoaxes and Hate Hypochondria. This incident sounds more like the latter, although it also could be the former.