Stakelbeck Reports on Mega Mosques and Non-Assimilation of Muslim Residents

This week’s edition of CBN’s Stakelbeck on Terror Show was particularly edifying, with an overview of Islam’s mega-mosque strategy to insinuate itself one neighborhood at a time, from Cologne to Brooklyn. Mega mosques are political structures that have little to do with individual worship. 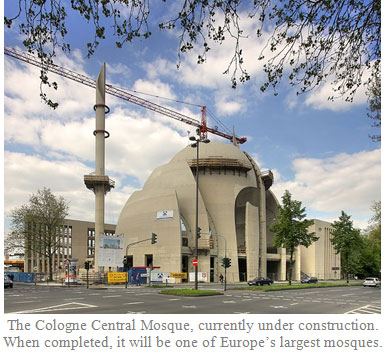 The mosques are our barracks,
The domes our helmets,
The minarets our bayonets,
And the faithful our soldiers.

In a welcome respite from depressing Islamic news, Stakelbeck interviews Gavin Boby, aka the Mosquebuster, to learn about his successful strategies to defeat invasion by architecture.

Finally, WND’s editor Joseph Farah is interviewed about the poll he commissioned in which US-residing Muslims were quizzed with politically incorrect questions regarding free speech, polygamy and American law. For example, nearly one-third would prefer to live under Sharia law, rather than the US Constitution. Any assimilation is on the surface only.

Such is the undesirable diversity Washington has welcomed into our midst through Muslim immigration.

[. . .] Wenzel’s poll said 7.2 percent of the respondents said they “strongly agree” with the idea of execution for those who parody Islam, and another 4.3 percent said they somewhat agree. [. . .]

Four in 10 said Muslims in America should not be judged by U.S. law and the Constitution, but by Islamic Shariah law.

“A much smaller percentage said they think the U.S. should establish an entirely separate court system to adjudicate matters involving Muslims,” Wenzel said.

While the respondents overwhelmingly lean toward the Democratic Party and like the direction Barack Obama, who repeatedly has praised Islam around the world, is leading this nation, they also have a fundamental conflict with American life, expressing objections to the freedom of speech and religion guaranteed in the Constitution.

“These survey findings show a community in conflict with the foundations of our nation, as many Muslims favor and enjoy the freedoms offered by the U.S. Constitution, including participation in elections here, but at the same time significant percentages want to be treated differently than the average non-Muslim when it comes to legal matters,” he said.

“While 39 percent of Muslims said they believe existing U.S. courts should consult Shariah law when adjudicating cases involving Muslims, a plurality of 45 percent said they do not agree with this idea. Asked if the U.S. should establish separate courts based solely on Shariah law to adjudicate cases involving Muslim, 21 percent said it should. Two-thirds of respondents – 66 percent – said that separate courts are not necessary to adjudicate Muslims.”

While 9 of 10 of the Muslim respondents said they agree with the First Amendment, they are also in conflict with it, Wenzel said, citing evidence in answers to “another question in the survey which found that one-third of Muslims – 32 percent – believe Shariah should be the supreme law of the land in the United States,” Wenzel said.

One in five say Muslim men should be allowed to follow their religion in America and have more than one wife, and 58 percent said criticism of their religion or of Muhammad should not be allowed under the Constitution.

Nearly one in three said Israel either has no right to exist or they were uncertain whether it does.