3 hours ago • By Christine Byers and Nicholas J.C. Pistor 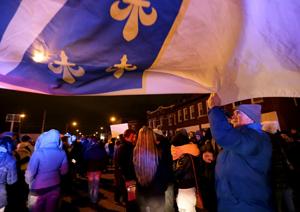 Sejdalija Nuhanovic holds up a Bosnian flag along Gravois Road after a march on Monday, Dec. 1, 2014. Police blocked traffic as hundreds of people marched from Holly Hills Avenue down Gravois Road to Itaska Street where Begic was killed. Photo By David Carson,

But authorities aren’t saying what they believe motivated the deadly attack. Read more

ST. LOUIS • One teen was charged with murder, two more were held and a fourth was sought Monday as officials spent another day trying to quell speculation that the bludgeoning death of a Bosnian immigrant was racially motivated.

“There is no evidence that this was a crime occasioned by the race or ethnicity of the victim,” Mayor Francis Slay declared in a formal statement. He added, “Speculation that this attack had anything to do with the Ferguson protests is absolutely unfounded.”

Police have been saying the same thing about the killing of Zemir Begic, 32, who was beaten to death with at least two hammers near Gravois Avenue and Itaska Street about 1:15 a.m. Sunday.

Robert Joseph Mitchell, 17, who lives on Winnebago Street, turned himself in at city police headquarters late Sunday and was charged with first-degree murder and armed criminal action. It was unclear whether two other suspects in custody, juveniles 15 and 16, will be charged as adults. Police said they know the identity of a fourth participant, who is sought.

Mitchell and one of the two juveniles in custody are black, police said; the other is Hispanic.

According to court documents, members of the group yelled at Begic, his fiancée and two others as they walked to Begic’s car. As the vehicle drove away, one teen jumped on the back and began beating on it. Begic stopped and got out, and one of the men taunted him to fight before all four attacked — and continued to beat him after he fell to the ground.

Detectives do not believe the attackers took anything but Begic’s life. He died at St. Louis University Hospital, suffering injuries to his head, abdomen, face and mouth. …

About 300 people gathered Monday afternoon for a two-hour vigil near the scene in the Bevo Mill neighborhood — about three times as many as had gathered Sunday night. Many were worried that racial tension had fueled the killing.

Lewis Reed, president of the Board of Aldermen, wrote a letter Monday to the Board of Estimate and Apportionment, asking the budget director to research ways to pay for more police. It echoes a call already made by Dotson, citing continuing protests since the shooting of Michael Brown by a police officer in Ferguson Aug. 9.

Reed wrote: “From what we have seen during the past week, there is no indication that the protests and demonstrations are going to be slowing down any time in the near future. We should not ask the members of our police department to continue to work 12-hour shifts indefinitely. This could lead to morale problems as well as diminishing returns with respect to effective law enforcement.”

Some who gathered at the scene Monday talked of surviving war in their home country and coming to America for a better life, only to be met with a crime like this. …

The Bosnian community in St Louis is in a difficult situation. Begic was attacked as a white man, and killed as a Bosnian. …

Begic probably did not back down, like a typical deracinated white American would have. So Begic and his companion Nuranjkovic were picked out for being white; and then their actions were more Balkan and Slav, and in that case it lead to his death. (I am not suggesting that the youths would have spared some pleading white Americans, but.)

So now what are the Bosnians to do? They would like to exact revenge, but the black and maybe hispanic youths who killed Begic were part of a mob, not members of a family or clan.

The Bosnians there fell victim to the the hatred for white Americans and they are in a catch-22. They can’t respond as Bosnians, because their enemies are not from a clan and were not after them as Bosnians. Their response would be to exact vengeance but against whom?