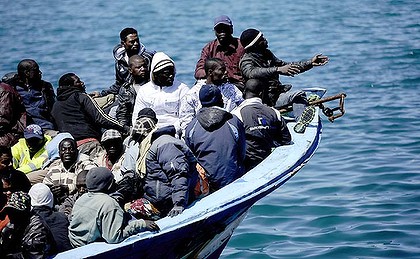 It’s spring in the northern hemisphere, so in many backward areas, young men are gathering en masse to head for first-world nations that offer generous welfare programs and jobs for the unskilled.

In passive Europe, a Camp of the Saints scenario is shaping up as the culturally weak societies there have been convinced by socialists that Europe is guilty of success and must therefore accept millions of the world’s unhappy poor as social justice payback.

A week ago, around 500 Africans breached the Melilla entrance to Spain (located on the coast of Morocco), a record number thus far. They were from Mali and Senegal, both of which are around 90 percent Muslim. Interestingly, the El Pais report following has an amazing rough video of hundreds of Africans running toward the border, beyond my embedding expertise unfortunately. Because of the oddball outposts of Europe on the African continent (i.e. Melilla and Ceuta), invasive young men can jog to the first world rather than hazard a leaky boat. (Watch Video.)

The massive run on the fence took place around 8am near Nano river, several sources confirmed. This is the largest jump to date.

A high-ranking official at the Spanish Interior Ministry called the event “very worrisome” and said it underscored “the severe migratory pressure on both autonomous cities,” a reference to Ceuta and Melilla, Spain’s two exclaves in North Africa.

The undocumented migrants, who say they come from Mali and Senegal, immediately headed for the local temporary immigrant holding center (CETI) amid jubilant cries of “Bosa, bosa,” which witnesses said means “victory.” [. . .]

As a result of weakened resolve of Europeans plus the upheavals in the Middle East, the influx of demanding foreigners to the continent has reached a record level. What a surprise.

Nearly half a million people sought asylum in Europe last year, the most in two decades, with the largest number coming from Syrians fleeing civil war, the European Union said on Monday.

The European Union rejected 65 percent of the requests and granted refugee status to 15 percent of the asylum seekers. The remaining 20 percent got at least temporary permission to stay in Europe. Rejected applicants had a right to appeal.

Some 50,000 applicants from Syria accounted for the largest number, nearly 12 percent of the total. More than 140,000 people have been killed in the three-year-old conflict, which has grown increasingly sectarian as regional powers back either President Bashar al-Assad, a member of the Shi’ite offshoot Alawite sect, or the mostly Sunni rebels.

Russia accounted for the second-largest number of claims, at 41,000, a 10 percent share.Afghanistan was third with 26,000 claims. Serbia, Pakistan, Kosovo, Somalia, Eritrea, Iran, Nigeria and Iraq followed.

Eurostat said the total was the largest number since 1993, when the EU recorded more than 500,000 claims. Germany, France, Sweden, the United Kingdom and Italy got 70 percent of the applications.

Eurostat also noted it had changed its methodology in 2008; until then, countries provided data on a voluntary basis.