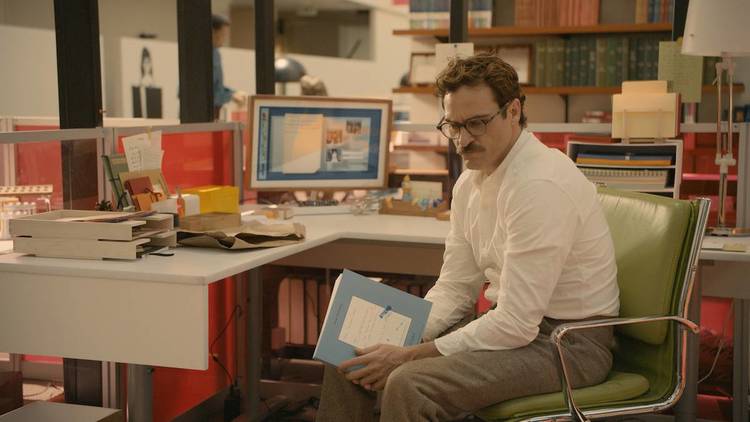 From my movie review in Taki's Magazine of the classy little sci-fi film Her, which just won a Golden Globe for Best Screenplay:

Why Her Is the Best Film of the Year: Thoughtful, elegant, and moving, Spike Jonze’s film about a man in love with his operating system is a work of sincere and forceful humanism.

One reason Her is so much less popular with viewers than with reviewers is because it is set in a future Los Angeles depicted as a serene, benevolent utopia stripped of everything that English majors have traditionally found tawdry about the real LA: swimming pools, movie stars, and fancy cars. Granted, those are the only things that the rest of the world likes about LA, but tasteful writers have always been irritated that Los Angeles was the Dream Destination of the Uncouth.

Some things about this Los Angeles of the future are much better than today: Density has replaced sprawl, so everyone lives in high-rises looking out over other high-rises (many of the exteriors were shot in Shanghai), to the thrum of a trancey aural wash of Arcade Fire music. They walk on elevated walkways and ride a subway system and work in rooms in velvety pastels. Poverty and cars seem relics of the past. In Theodore’s underpopulated workplace, everyone is polite and supportive.

By the way, writer-director Spike Jonze is the co-creator of the Jackass franchise, and star Joaquin Phoenix made a hoax documentary about how he was quitting acting to become a rap star.

I don't know if I'm right that Jonze and Phoenix are pulling an expensive prank on the SWPL niche audience by making an intentionally dweeby movie, but Her is an awful lot funnier when viewed from that perspective.