"Spent:" This Should Be Better Than Malcolm Gladwell's Books

Geoffrey Miller, the bright and handsome evolutionary psychologist at the U. of New Mexico, author of The Mating Mind a decade ago, has a new airport book coming out that should give Malcolm Gladwell, Richard Florida, Steve Levitt and the rest a run for their money. The idea of nonfiction books aimed at the frequent flier class that draw upon the human sciences for insights of value to people in business is a good one. Unfortunately, the execution has been mediocre so far. I haven't seen this one yet, but I have hopes for it.

Why do we buy what we buy? Like Freakonomics or The Tipping Point, SPENT: Sex, Evolution, and Consumer Behavior

(Viking; On-sale: May 18, 2009; $26.95), by leading evolutionary psychologist Geoffrey Miller, is a bold and revelatory book that illuminates the unseen logic behind the chaos of consumerism and suggests new ways we can become happier consumers and more responsible citizens. 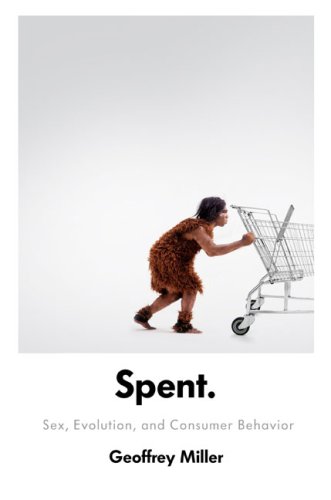 Evolutionary psychology–the compelling science of human nature–has clarified the prehistoric origins of human behavior and influenced many fields, ranging from economics to personal relationships. In SPENT, Miller applies this revolutionary science’s principles to a new domain: the sensual wonderland of marketing and status seeking that we call American consumer culture. Starting with the basic notion that the goods and services we buy unconsciously advertise our biological potential as mates and friends, Miller examines the hidden factors that dictate our choices in everything from lipstick to cars, from the magazines we read to the music we listen to. With humor and insight, Miller analyzes an array of product choices and deciphers what our decisions’ say about us, giving us access to a new way of understanding–and improving–our behaviors.

As I've been looking into buying a car over the last couple of years, I've been struck by how much car-buying is driven by sexual display urges. So, at my age, much of what I see in car design seems more annoying than cool. Even the Honda Accord (which I bought in 1988 and 1998) fits in to this pattern. The LA Times' best writer, car critic Dan Neil wrote:

I was sitting at a red light when they rolled up beside me, the guy riding his Suzuki Do-Me 8000 with his hot female companion on the back, her thongage pouring out of her low-rise jeans. Her blond hair fell from beneath the helmet and fluffed weightlessly in the hot breeze. Her skintight ballistic-armor motorcycle jacket was unzipped down to her navel. It's a good look, I guess, if you go in for that sort of thing.

As I sat there in the Amana-white 2008 Honda Accord EX-L sedan, she looked over at me. I knew what she was thinking. I knew she wanted me.

And why wouldn't she? The Honda Accord ska-reams confirmed heterosexual, and not in a Larry Craig way, either. This car ought to be issued with a complimentary pair of relaxed-fit dad jeans. Every male owner should get a free BlackBerry, which is like monogamy's ankle bracelet. To own this car is to be possessed with an inexplicable urge to trim hedges. While other cars suggest the owner is still working out issues — experimenting, if you will — the Accord sedan says, "Hey, I'm past all that. I'm a smoldering volcano of straight suburban love, and I accept it."

For Accord-driving women, the message is related but different: "My husband likes girls."

I finally ended up buying my friend's superbly-maintained 1998 Infiniti I30 (basically, an expensive Nissan Maxima), with 196,000 miles on it. It exudes the High Bourgeois image I'd like to hold about myself: "This man invests in quality for the long term." In contrast, the car I've actually owned for the last eleven years, my dented, paint-pealing, self-destructing 1998 Accord with 108,000 miles, broadcasts the message: "This vehicle has been owned and operated by a family of wild dingoes."

One interesting angle I've been pondering is how Stuff White People Like products, like the Toyota Prius, tend to androgynously subordinate sexual display to class display. (But I'll keep that idea for another time.)

In his exploration, Miller examines a wide and delightful range of familiar products and what they reveal about us, from the Sims to Rolex watches, from L’Or?©al lipstick to the Hummer. SPENT illuminates:

o Why we’re such suckers for products such as Smartfood, Smartwater, Smart Start, SmartMoney, and Smart Cars–and why marketers would never use the word ”intelligent” in such products

o The real reason so many exercise machines are unused

In these economic times when it’s more important than ever to be aware of why we buy what we do, SPENT is both a fascinating look at consumer behavior that will surprise and intrigue.

Geoffrey Miller is an evolutionary psychologist and author of The Mating Mind. He was educated at Columbia and Stanford and is an associate professor of psychology at the University of New Mexico. He lives in Albuquerque, New Mexico, with his wife, daughter, and many products.

For some reason, this whole topic reminded me of a refrigerator magnet I saw a couple of years ago. It had a picture of a pretty girl dancing the Hokey-Pokey at a wedding reception, and the caption read:

"What if the Hokey-Pokey is what it's all about?"

Perhaps that refrigerator magnet was my Kant-reading-Hume moment.

Speaking of things that have stuck in my memory, Geoffrey Miller's wife's name is Rosalind Arden, and I've finally figured out why that pair of names is so memorable: "Geoffrey Miller" is the most Chaucerian name imaginable ("The Miller's Tale" is perhaps the most famous of Geoffrey Chaucer's Canterbury Tales), while "Rosalind Arden" is the most Shakespearean name imaginable. Rosalind is the heroine of Shakespeare's pastoral comedy "As You Like It," which is set in the Forest of Arden.