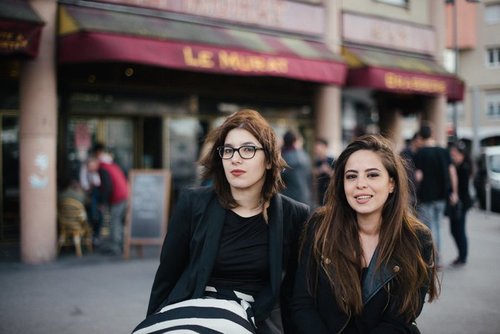 Here is an inadvertently funny New York Times article about a band of plucky underdog marginalized outsider bloggers in the banlieues of Paris speaking Truth to Power, except that all the details undermine the premise …

BONDY, France — They gather every Tuesday for a staff meeting, bloggers, journalists and young people from the impoverished Paris suburbs, at the offices of the Bondy Blog, named for the surrounding neighborhood. …

The blog, which was created during the riots that spread through France in 2005, gives a voice to groups often underrepresented in mainstream news media coverage. Self-described citizen journalism, the Bondy Blog regularly reports on politics and social issues, with many of the writers sharing scenes and moments from their lives at work or in the neighborhood.

Or about 7,333 per day, which is not bad, but not exactly Global News.

has won awards for its work, and its journalists regularly collaborate with outlets like Télérama, Elle, Le Monde.fr, Canal Plus, L’ Obs and Radio France. …

“The French establishment is a little uncomfortable with them,” Mr. Aidi said in an interview. “The American Embassy often consults and invites the journalists to come to the United States. It gives voices to banlieue residents. Most of the journalists are from the community, and of immigrant background. And now they will send a journalist to do a story on police brutality in the U.S., or if Muslims are better off in America.”

While some in the establishment may be uncomfortable with the Bondy Blog, that has not stopped a procession of politicians from making the pilgrimage to its offices.

“Politicians jostle to come here,” Mr. Nabili said with a smile after the prep session, standing in front of a board full of newspaper and magazine covers and clips that mention the blog. “We are over-quoted in the media, because there is a huge void in these neighborhoods to fill.” …

While the blog’s contributors have been praised for their reporting, their greater purpose is to give voice to the voiceless, and they are not shy about expressing their opinions.

Widad Ketfi, 30, [Above, left] one of the blog’s top writers, explained her approach as she covered the trial this year of the two police officers involved in the 2005 case. She readily admits that she was furious when the two officers were cleared of the charges, and made sure her coverage reflected that.

“At the trial, I was so emotional and angry that I wasn’t a journalist anymore,” Ms. Ketfi said. “I can’t get used to the cynicism of other journalists. And that court decision was an insult to the people in the banlieues.”

Ms. Ketfi, who has been writing for the blog since 2007, has graduated to working for mainstream news media like Canal Plus and M6 television. An influential voice in social media, she was also featured on the cover of Le Monde in 2010. She traveled to Gaza to cover the war there last summer for the Bondy Blog.

She likes to describe herself as a “no-go zone” reporter, a reference to Fox News reporting early this year, inaccurately, that the French and British police avoided some predominantly Muslim neighborhoods because they were dangerous.

“When I started writing for the Bondy Blog, I had a desire to change the way young people from the banlieues were portrayed in the media,” Ms. Ketfi said. “We live in these neighborhoods, so we have a different outlook and a better understanding and approach.”

The daughter of Algerian immigrants — her father is active politically, but cannot vote — Ms. Ketfi went to journalism school after discovering a passion for reporting at the Bondy Blog.

She is unapologetic about being an opinionated journalist.

“Journalists take a side on matters, but don’t realize it,” she said. “For example, when they write ‘Je suis Charlie,’ ” she added, referring to the rallying cry heard after the terrorist attack on the satirical newspaper Charlie Hebdo, “it is not a neutral stance, which is perfectly fine.”

In January, the French left-leaning newspaper Libération began hosting the blog on its website. The blog’s reputation has reached across the Atlantic, and the actor Samuel L. Jackson paid it a visit in 2010. The organization even got Serena Williams, winner of the French Open last month, to give tennis lessons to local children.

Islam is a major subject for the blog, though it does not consider itself a Muslim publication. “Islam is something that many journalists still don’t know well,” said Faiza Zerouala, [Above, right] whose parents are from North Africa. She also found her calling at the blog.

“The Bondy Blog tries to remove the blinders that newsrooms continue to wear,” she added. “A whole section of society in the banlieues is ignored in France. Many topics like Islamophobia and racism are not discussed.”

Ms. Zerouala wrote a book, “The Voices Behind the Veil,” in which she talks about the diversity of women who are not afraid to show they are different, and wear the head scarves known as hijabs to show their Muslim faith.

“There is a majority discourse in France about women wearing a head scarf being submissive,” she said. “It is always the same analysis.”

Ms. Ketfi does not wear a head scarf and has never felt like an outsider in France. But she believes the local news media stigmatizes Arabs and Muslims.

“You feel attacked,” she said. “In newsrooms, reporters are careful not to say offensive things in front of me, but they have shown on several occasions that they have a bias against Muslims.”

Mr. Nabili, who also teaches journalism, said he viewed his work at the blog as an investment in France’s next generation of journalists. With a state-funded budget of about $135,000 a year, he manages to pay contributors around $45 an article.

France has been an extremely centralized country/culture since at least Louis XIV. It’s a lousy place to be an outsider, but a cool country in which to be an insider.