In Lewiston, Maine, Somali immigrants continue to be a problem. The latest unpleasantry is over the idea that they should assimilate to American culture, which the Somalis find insulting, and they are demanding that Mayor Robert MacDonald resign for his remarks.

With Somalis, it’s hard to tell whether the source of their general hostility is a tribal habit or Islamic supremacism.

Didn’t anyone tell them that fitting in was part of the immigration deal? That assimilation to American values, language and culture was the requirement for welcome and acceptance by the citizens? That detail was explained to newbies not so long ago. (See Cliff Notes Assimilation for Somalis for a reminder of the good old days of 2006 when at least a rudimentary outline of cultural integration was taught.)

The current atmosphere of political correctness has made the traditional idea of assimilation fall out of favor in certain quarters. School indoctrination from pre-school through college drills malleable minds with the false belief that diversity is the highest possible good in the universe.

But even with the massive educational and media campaign propagandizing diversity, citizens prefer traditional assimilation. A 2011 Rasmussen poll found “An overwhelming majority (73%) of voters say people who move to the United States from other parts of the world should adopt America’s culture, language and heritage.”

Below, Somalis demand that Lewiston’s mayor resign because they don’t want to assimilate to America’s culture and values. 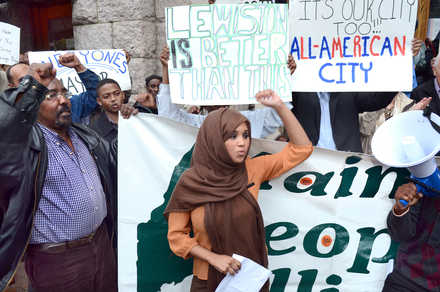 One reads in the press that Somali expats are moving back to the dear homeland which is lately becoming more peaceful. In Mogadishu and beyond, there’s plenty of Somali culture for anyone who wants some, providing a viable choice for unhappy members of the diaspora. Flights leave North America for Africa regularly.

(You can send Mayor Robert MacDonald a message of support at rmacdonald@lewistonmaine.gov.)

LEWISTON, Maine (AP) — Ten years after a Lewiston mayor set off a firestorm by saying the city’s Somali population was growing too fast, a new mayor’s remarks about the immigrant community is sparking another wave of anger and calls for his resignation.

Somali immigrants and their supporters in this former mill city in central Maine say Mayor Robert Macdonald should apologize and step down for what they call repeated anti-immigrant remarks, including telling a British Broadcasting Corp. interviewer that immigrants should “accept our culture and leave your culture at the door.”

A group of about 50 protesters rallied outside City Hall on Thursday before delivering 1,400 petitions to Macdonald’s office, asking for his resignation.

The mayor’s remarks sounded like he was telling immigrants to abandon their religion, their language and their identities, said Nimo Yonis, 26, one of an about 6,000 Somali refugees who live in Lewiston and the neighboring city of Auburn. The mayor’s words were painful, hurtful and “represent hate,” she said.

“Basically, he’s telling us to forget who we were,” Yonis said. “Just leaving your culture at the door is leaving what you believe, what you stand for and who you are at the door.”

Macdonald has attempted to clarify his comments, saying immigrants should try to assimilate into American culture. He has said his comments were taken out of context, and has claimed he never said anything derogatory about Somalis.

Macdonald was not in his office Thursday and didn’t immediately return a phone message left by The Associated Press.

His words have rekindled memories of a decade ago when then-Mayor Larry Raymond wrote a letter in 2002 asking Somali leaders to discourage friends and family from relocating to Lewiston, saying the city’s resources were “maxed-out.”

The first Somali immigrants arrived in Lewiston in early 2001, moving 40 miles north of Portland because of plentiful, cheap housing. By the time Raymond wrote his letter, nearly 1,000 Somalis had moved to the Lewiston area.

The outrage over his letter attracted international attention and spurred a 4,000-person rally at Bates College, urging Mainers to embrace the influx of immigrants. During the rally, a small number of white supremacists who called for the expulsion of the Somalis gathered elsewhere in the city.

With the current mayor, critics say Macdonald has made repeated inflammatory remarks about the Somali population.

He wrote in a local weekly newspaper that “submissive Somali women turn into obnoxious customers at the grocery store cash register.” He also wrote that he was tired of news stories about Somalis being treated poorly; most complaints, he wrote, came from “boo-hoo white do-gooders and their carpetbagger friends.”

He later told a reporter that immigrants shouldn’t “insert your culture, which obviously isn’t working, into ours, which does.”

Mark Cayer, president of the Lewiston City Council, read a statement Thursday on behalf of the whole council saying the mayor’s comments were his alone and not representative of the council or the city as a whole.

The letter written by Raymond in 2002 and Macdonald’s words last month are “two totally different scenarios and two different moments in time,” he said.

“But clearly there was division in the community at that time, and there’s still evidence of a division now,” he said. “But overall I think the community will grow from this.”