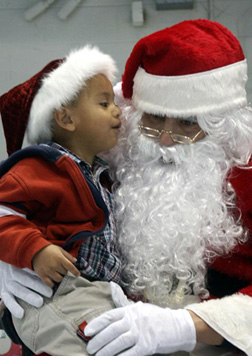 Of all the impressions Somalis have made from Minneapolis to the horn of Africa, a new description has become appropriate — grinch.

Yep, Somali parents in Minnesota demanded that their kids not experience Santa Claus, so his annual visit to a Head Start class in the town of St Peter has been canceled. The Islamic complaints of a few have prevented a normal American custom for the rest of the kids. Even the local ACLU thought it was an unnecessary cut.

Santa Claus, as portrayed by Dennis Jackson, won’t be visiting students at the Head Start classes in St. Peter this year.

Jackson has made appearances the past four years at the classes for students who need help preparing for school, but this year officials said, “No, no, no.”

The reason: The classes have many immigrant children who don’t celebrate Christmas, says the Mankato Free Press.

She didn’t say how many objections were made, but said more than one would be enough to cancel Santa.

“The simple truth is that southern Minnesota has become a much more culturally diverse society than it was a few decades ago,” she told the paper. “Part of our challenge in Head Start is providing an environment where young children from many different cultures can all feel comfortable.”

Jackson said rather than depriving the rest of the group of the Santa experience, parents who object should take their kids out of the class during the half hour he spends talking to the kids and giving them candy.

Diversity now means that American customs can be ended when any immigrant disapproves.

Weren’t they supposed to acculturate to our society rather than the other way round? When did that change?