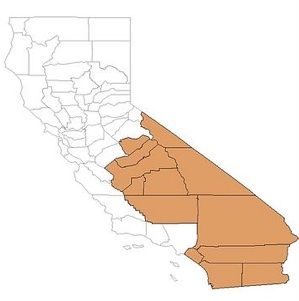 California's raging dysfunction regarding its perennially overspent budget and permissive treatment of illegal aliens has prompted a Riverside County Supervisor to call for a division of the state.

The idea is not a new one; many see the state as increasingly ungovernable due to extreme diversity of political views, a history of bad governance choices and worsening tribalism. (SeeÂ the Chronicle's 1998 commentary, It's Time To Divide California and my 2009 Vdare.com article, The California Crisis: Divide And Prosper?.)

Supervisor Jeff Stone is disgusted by liberal leaders' crazed spending in Sacramexico and irresponsibility regarding immigration enforcement, among other things.

His new state (map shown) would include most of southern California, but with the hopeless Los Angeles County snipped off. (Nobody wants LA, particularly northern Californians who are sick of decades of water grabs.)

RIVERSIDE (CBS) - Is the state of California about to go "South"?

Riverside County Supervisor Jeff Stone apparently thinks so, after proposing that the county lead a campaign for as many as 13 Southern California counties to secede from the state.

The creation of the new state would allow officials to focus on securing borders, balancing budgets, improving schools and creating a vibrant economy, he said.

"Our taxes are too high, our schools don't educate our children well enough, unions and other special interests have more clout in the Legislature than the general public," Stone said in his statement.

He unveiled his proposal on the day Gov. Jerry Brown signed budget legislation that will divert about $14 million in 2011-12 vehicle license fee revenue from four new Riverside County cities.

Officials fear the cut will cripple the new cities of Eastvale, Jurupa Valley, Menifee and Wildomar.

Stone said he would present his proposal to the Board of Supervisors July 12. The new state would have no term limits, only a part-time legislature and limits on property taxes.

"A secessionist movement? What is this, 1860?" Brown spokesman Gil Duran told The Press-Enterprise.

"We should begin to get our own budget balanced, which we haven't done yet, and put in place some of the reforms we need in this county before we try and go and restructure the government in the great state of California," he told the Press-Enterprise.

"The temperature has gone up in Riverside County and it seems Supervisor Stone has gotten too much sun recently," he added.