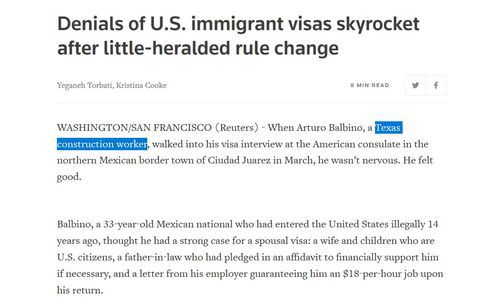 Sob Story About Visa Refusal Has A Happy Ending...For America

The hero of this sob story, a Texas construction worker and illegal alien, is 33 years old and he and his wife have five children. That's a household of seven. The hero has a job guarantee of $18 per hour working construction.[Denials of U.S. immigrant visas skyrocket after little-heralded rule change by Yeganeh Torbati and Kristina Cooke, Reuters, April 15, 2019 ]

The hero's father-in-law promised he would support the family with his $90,000 per year income. What if he doesn't?

The American Consular officer hearing the case to legalize the hero's status did the math and decided that the hero and his family would be a public charge if granted legal US entry.

Finally, an immigration story with a happy ending but now there are still millions of illegal aliens to go.