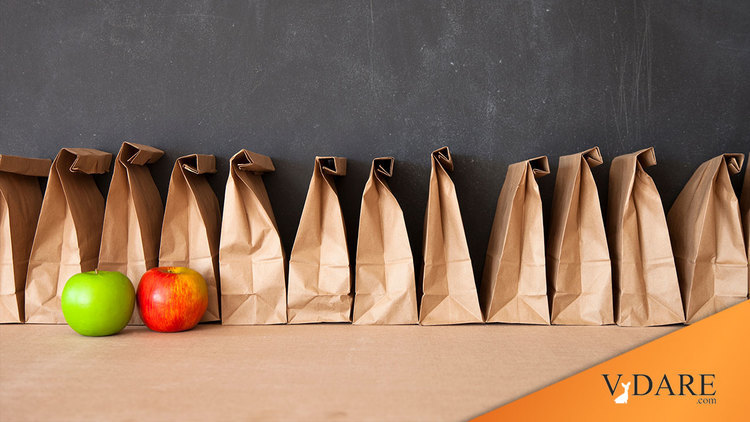 Posting this item makes me feel a little grinchy, but it's certainly a sign of the times that schools have become food distribution points for immigrants, illegal aliens and poor Americans.

It wasn't always that way. School lunches weren't subsidized or even provided — parents were expected to pack some decent chow in a bag for kiddies to carry in. Certainly a whole wheat sandwich with sprouts and turkey is a lot more nutritious than a "hot meal" of greasy fries and pizza.

In addition, a parent-provided bag lunch would avoid problems like demands for halal food by annoying Muslims. For example, the Detroit school system caved to Islamic insistence on halal lunches for their special, diverse children.

Plus, it's not just lunches that are subsidized by taxpayers. Many kids get breakfast, lunch and a snack every day. In addition, there is a "Seamless Summer" program so kiddies get free food with no break.

The upshot is that millions of children are fed by the government, not their parents. The USDA reports that its program feeds 2.9 million children. The National School Lunch Program cost $9.3 billion in FY 2008.

The two snowstorms that pummeled the region, leaving more than 3 feet of snow in some areas, deprived tens of thousands of children from Virginia to Pennsylvania of the free or reduced-price school lunch that may be their only nutritious meal of the day. The nonprofits that try to meet the need when school is not in session also closed their doors for much of the week, leaving many families looking at bare cupboards. And many parents working hourly jobs were unable to earn any money during the week, as the snow forced businesses to close.

Caplon is a food services supervisor for Montgomery County Public Schools, where about 43,000 children are eligible for free or reduced-price lunches. Some also get breakfast, dinner and bags of staple foods to take home for the weekend. The snow days meant children would get none of that until Tuesday, because schools are closed Monday for Presidents Day.

"We've been bothered by this all week," Caplon said.

So Caplon arranged for Manna Food Center, a local food bank whose board she chairs, to bring boxes of food Friday to two still-closed elementary schools. Officials used the school district's automated phone system to notify parents of the distribution.[ String of snow days deprives many students of food,February 15, 2010 ] 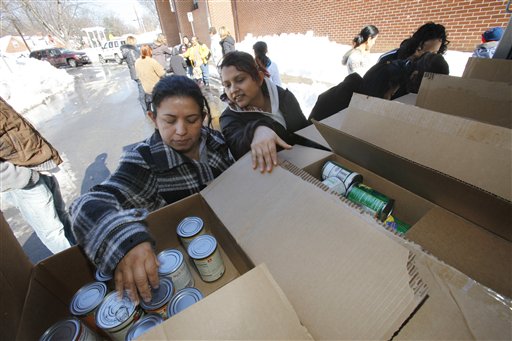 In this Friday Jan. 12, 2010 photo, Mercedes Rodas, left, chooses cans of food that were being provided to people whose children are usually in the school lunch program at Rolling Terrace Elementary School in Takoma Park, Md., in the aftermath of back-to-back blizzards.