As a careful writer, I normally spend a lot of time researching topics that are often controversial, like how illegal immigration is illegal and such. But I’ve never been so surprised as when investigating how far robotics have advanced in their capability to replace humans in complex tasks, from manufacturing to ordering in restaurants and automatic cappuccino stands.

In short, the robotic sci-fi future is here and now.

Below, inside Google’s self-driving car, now under development. In the future, human cabbies and truck drivers may be phased out of employment. 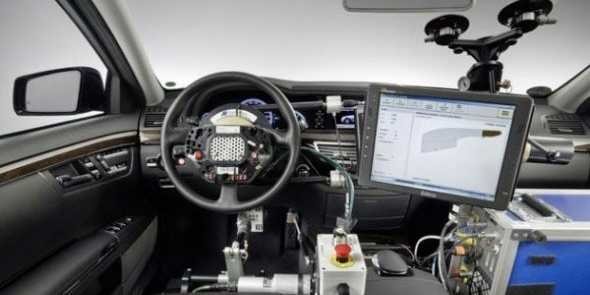 Given the increasing encroachment of smart machines into unprecedented areas of the economy, the predicted shortage of workers because of boomers’ retirement is not happening. We see it in the jobless recovery, where Wall Street is thriving, but Main Street is not. A 2013 report from Oxford University estimated that 45 percent of American jobs will be automated within the next 20 years.

The expansion of automation and robotics may be the most important argument yet against amnesty (specifically legalization with work permits for lawbreaking intruders) and doubling legal immigration.

There is a short excerpt below of my recent article about growing threats to American employment, and the whole thing may be read in the online version of The Social Contract:

Three Stakes in the Heart of the American Dream, by Brenda Walker, The Social Contract, Winter 2014

The American worker, from ditch-digger to rocket scientist, is under assault as never before. Government immigration policies, globalist eco- nomics, and the march of technology have combined to create a shrinking employment universe for ordinary Americans, the effects of which have been accumulating over decades. [. . .]

A large category of life and commerce being eyed for robotic improvements is driving. Google founder Sergey Brin is enamored of the idea of improving highway safety with “self-driving” cars and is investing his considerable wealth into developing the software and machinery. He predicted in 2012 that automated cars would be available in a few years. Google engineers were hard at work on the project, and a confident Brin remarked, “You can count on one hand the number of years until ordinary people can experience this.”

Presumably, it follows that robotic trucks and taxis would soon follow, with a job loss of potentially millions. In addition, Google has acquired several technology companies that are strong in robotics, indicating a serious move in that direction. The company has suggested it wants more automation in electronics assembly (now largely manual), and it plans expansion into retailing, such as automating the shipment process.

The New York Times published a chipper, tech-swoony article about the company’s smart automation, “Google Puts Money on Robots, Using the Man Behind Android” (12/4/13), in which executives called their vision a “moonshot” of advanced robotic innovation. However, quite a number of the online comments remarked about the job loss involved in the company’s plans for the future.

The advanced robotic warehouse is already here, created by the firm Kiva. Small wheeled robots scoot around the warehouse filling orders, guided by a main computer tracking the inventory. The robots are wheeled boxy objects about a foot high, and proceed automatically under movable shelving structures to transport the desired items to packing stations. The humans assist with basic manual labor; the machines and computers do the organizational work.

Simple automated farm machines have been around for a while, like weeder and picker contraptions that do the work of stoop labor. Another apparatus in the pipeline is a wine grape pruner. Fresh fruit picking is more challenging, but the techsters are working on that machine also. Agribusiness complaining about a shortage of illegal alien workers can instead turn to mechanization — a fine use of technology in this instance.

Another farmbot is an automated cow milker used by dairy farmers, which has the added attraction of allowing the cows to be milked whenever the animals want. That’s a big plus to farmers who tire of the unbreakable routine of having to milk twice daily, every single day. Because of the constant need to milk the cows, not having to rely on illegal labor is a major relief for farmers. So the robot milkers are much liked by their users.

Restaurants have long offered opportunities for low-skilled workers, but even those businesses are beginning to see automation. An eatery in Harbin, China, has 18 different types of robots with different functions, such as usher, server, also specialty bots for dumplings and noodles. News reports and photos make the place look gimmicky, and the robots appear to require a lot of human help. However, the autumn 2013 protests by U.S. fast-food workers demanding a doubling of wages have brought the response from business that it would institute more automation rather than spend so much on labor. [. . .]