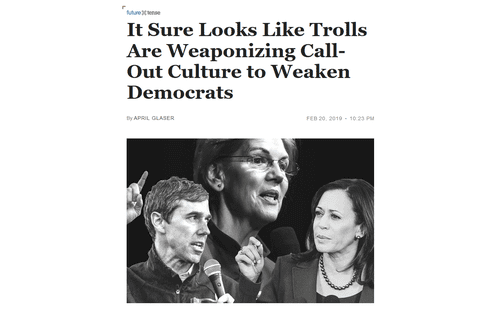 The election trolls have logged on. Except, despite the cleanup efforts of Facebook, Twitter, and YouTube following the 2016 campaign, they never really logged off, with coordinated disinformation campaigns still trying to sow confusion on social media during the 2018 midterms. But now they’re getting ready for the big show. With 12 Democratic candidates already vying for the White House and more to come, memes and misinformation that appear to be coordinated and possibly connected to foreign propaganda efforts are already afflicting the race. According to a report Wednesday in Politico, Democratic contenders have been the targets of online propaganda aimed at sensationalizing missteps and promoting falsehoods. If these troll campaigns share a goal with the efforts of 2016 and 2018, then the point may be to widen societal divisions already prominent in American life and, in particular, weaken the Democratic Party. In particular, they seem intent on weaponizing a productive moment in our politics in which public figures are finally being held to account for their past actions, and Democrats are sometimes asking other Democrats to resign. The trolls want Democrats to eat each other.

So far, we don’t know the source of this activity—it’s not clearly linked to the Internet Research Agency, the Russian disinformation factory that was behind thousands of accounts stirring unrest during the 2016 and 2018 elections.

… Days after [Kamala] Harris announced her candidacy, former San Francisco Mayor Willie Brown wrote a terse op-ed for the San Francisco Chronicle admitting that he dated Harris, apparently because reporters had been calling him about it. That was on Jan 26, but even now, weeks later, chatter about their decades-old relationship is still proliferating on social media. On Facebook, videos made about their relationship have racked up hundreds of thousands of views, and on Twitter, replies to Harris’ tweets are saturated with lewd comments accusing Harris of using sex as a ladder to success.

Trolls of both foreign and domestic vintage helped make the 2016 election the cacophony we remember. Now, as candidates struggle to differentiate themselves at a time when voters on the left may punish a candidate who has crossed ethical lines, it’s safe to expect trolls on social media to play every misstep up to its fullest—potentially as part of another propaganda effort to ensure victory for Donald Trump. Even if a meme you see that disparages a Democratic candidate is based on truth, it’s important to remember that its goal might be to simply weaken Democrats by making candidates toxic for swaths of the left, and ultimately make 2020 a repeat of 2016.