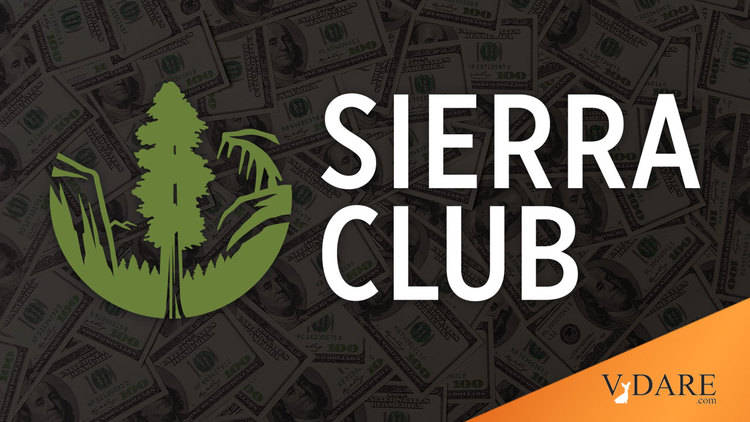 The Sierra Club election results weren't a pretty picture, but the massive force the powerful organization brought to bear against grassroots reformers reveals how fearful the Old Guard remains about holding on to power. (SUSPS Spokesman Dick Schneider estimated that reformers were outspent 20 to 1.)

The numbers were plain ugly—the important immigration initiative lost big, with only 16 percent of Sierra voters approving the common-sense proposal. The population-responsible candidates also were clobbered.

The results show how completely the Sierra Club has been corrupted by money and politics. The organization was once a non-partisan advocate for preserving the environment of America and the planet. Now the Sierra Club is aligned with some of the most fanatical elements of the far left, including billionaire George Soros, filmmaker Michael Moore and open-borders extremists like La Raza. And the Old Guard certainly wants more cash from investor David Gelbaum, who scandalously "donated" more than $100 million to the Sierra Club on the condition that excessive immigration not be recognized as a legitimate environmental issue.

The stealth machinations of the leftist MoveOn.org appear to have been very effective in destroying Sierra reform. They evidently sent out millions of emails warning of a "hostile takeover" by "right-wing anti-immigrant groups." (In 2004, MoveO n's email list was estimated to have 2.2 million members.)

How else can you explain the discrepancy between the 2005 vote on a common-sense immigration initiative that received only 16 percent of the vote and the 1998 election, free of the meddling MoveOn.org, in which the immigration question got 40 percent? (History of recent Sierra election results.) Apparently fear still works among the easily led Sierra membership, most of whom are neither active nor informed.

Furthermore, the corrupt Old Guard couldn't even prepare a fair ballot: each of the proposals was followed by the Board's recommendation in bold type. It was like an election in the Soviet Union, positively Stalinesque.