In Europe, Catholic churches have generously (or foolishly) turned their sanctuaries into flophouses for African fleebags looking for a freebie life in the First World.

Below, the Catholic church of St Curato D’Ars in Palermo has been transformed into a dorm to house African men swarming to reach Europe. 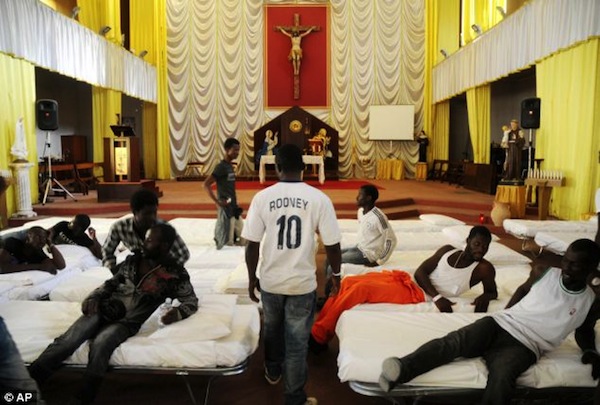 Father Rosario Francolino remarked about the local efforts being made at his church: “We’ve substituted the altar with beds. I think this is the most beautiful mass that this community could celebrate in these days. Palermo’s community is alive to events and showing great interest.”

Perhaps their brother churches could do likewise in America, where we have a similar tsunami of unwanted illegal aliens crossing through Texas claiming refugee status. Catholic Charities has set up a welcome center in McAllen Texas but that hardly compares with the dedication of opening up church sanctuaries to the beloved migrantes.

Plus, the Central Americans flooding south Texas are fellow Catholics, unlike the Africans invading Europe who are mostly Muslims and animists. Catholic clerics residing in America could surely be as welcoming as those across the Atlantic.

But so far, the wealthy Catholic church has merely dinked around the edges of providing for their hispanic co-religionists and has been happy to let the American taxpayer bear the burden, estimated at $2 billion for the short term.

Anyway, if churches get really crowded in Sicily, perhaps the Pope could open the Vatican itself for African campers. Lots more asylum claimers are coming this summer.

African migrants seek sacred shelter in Sicilian church after being plucked from the sea by Italian navy, Daily Mail, June 18, 2014

African migrants whose boats ran into trouble in the Mediterranean Sea are seeking shelter in a Sicilian church after being rescued by the Italian navy.

Over the weekend, the Coastguard and Navy plucked 300 migrants from the water as well as recovering the bodies of 10 who had died after their dinghy had overturned.

Some are now packed into the Catholic Church of St Curato D’Ars in Palermo, Sicily where they are seeking temporary shelter.

Naval officer Salvatore Scimone said in one incident, 39 survivors had grabbed on to the dinghy after it overturned on Saturday until emergency services were able to rescue them and bring them to safety aboard another boat.

However he added that he feared that an undetermined number of others were still missing in the sea north of Libya.

In a separate rescue, three Italian ships took aboard 281 migrants who said they were Syrian and whose fishing boat had ran into problems.

They were then being taken by the ships to the Italian mainland.

Tens of thousands of migrants attempt to enter Europe illegally every year via Italy, crossing the Mediterranean in rickety smuggling boats.

More than 40,000 people made the crossing last year, many on overcrowded and dangerous wooden boats, with investigators estimating that 20 per cent ultimately end up in Britain.

This prompted Pope Francis to say that the Vatican would throw open its monasteries and convents as shelters, adding the church should be the ‘first port of call’ for migrants.

Currently, 120 migrants, including 15 children, have been occupying Santa Maria Maggiore, the giant basilica where the Pontiff goes to seek guidance before every major endeavour, for over a week.

The group, from Algeria, Morocco, Ukraine as well as Romania, have requested asylum from the Vatican after being evicted from their squat in Torre Spracata, a district in south-eastern Rome by Italian authorities.

But they claim that after writing a letter to the Pope asking for help, they have still not heard anything.

Don Angelo, one of the priests at the church, told La Repubblica: ‘The Basilica is beginning to feel the weight of their presence.

‘They are good people…. But unlike other churches we don’t have another room for parishioners or a space to put them in. This is a holy place that at night turns into a dormitory. ‘