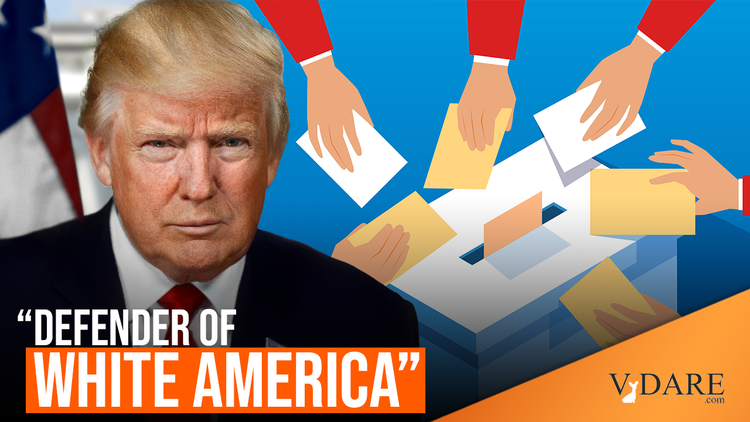 Shocking Revelation in NYT: Critics Said the President’s Move Was a Transparent Play for White Votes

More Than Ever, Trump Casts Himself as the Defender of White America

Presenting himself as a warrior against identity politics, the president has increasingly made appeals to the grievances of white supporters a centerpiece of his re-election campaign.

Peter Baker is the chief White House correspondent and has covered the last four presidents for The Times and The Washington Post. He also is the author of five books, most recently “Impeachment: An American History.” @peterbakernyt • Facebook

WASHINGTON — After a summer when hundreds of thousands of people took to the streets protesting racial injustice against Black Americans, President Trump has made it clear over the last few days that, in his view, the country’s real race problem is bias against white Americans.

Just days after returning from Kenosha, Wis., where he staunchly backed law enforcement and did not mention the name of Jacob Blake, the Black man shot seven times in the back by the police, Mr. Trump issued an order on Friday to purge the federal government of racial sensitivity training that his White House called “divisive, anti-American propaganda.”

The president then spent much of the weekend tweeting about his action, presenting himself as a warrior against identity politics. “This is a sickness that cannot be allowed to continue,” he wrote of such programs. “Please report any sightings so we can quickly extinguish!” He reposted a tweet from a conservative outlet hailing his order: “Sorry liberals! How to be Anti-White 101 is permanently cancelled!”

Not in generations has a sitting president so overtly declared himself the candidate of white America. While Mr. Trump’s campaign sought to temper the culture war messaging at the Republican National Convention last month by showcasing Black and Hispanic supporters who denied that he is a racist, the president himself has increasingly made appeals to the grievances of white supporters a centerpiece of his campaign to win a second term.

While he initially voiced concern over the killing of George Floyd under the knee of a white police officer in Minneapolis this spring, which touched off nationwide protests, he has focused since then almost entirely on defending the police and condemning demonstrations during which there have been outbreaks of looting and violence.

Those were just Peaceful Protests Intensifying.

In effect, he is reaching out to a subset of white voters who think the news media and political elites see Trump supporters as inherently racist. Mr. Trump has repeatedly rejected the notion that America has a problem with systemic racial bias, dismissing instances of police brutality against Black Americans as the work of a few “bad apples,” in his words.

… But analysts said the convention had been aimed at making it easier for white voters uncomfortable with Mr. Trump’s history on race to support him and that it might have appealed to nonwhite voters who bristle at the so-called cancel culture that has become a favorite target of the right.

Mr. Trump wrote or reposted roughly 20 Twitter messages about the memo on Saturday and on Sunday said the Education Department would investigate schools that use curriculum from the 1619 Project by The New York Times Magazine, an effort to look at American history through the frame of slavery’s consequences and the contributions of Black Americans.

Back in August 2019, NYT executive editor Dean Baquet reassured NYT staffers that despite the failure of the NYT’s Plan A for taking down Trump, RussiaGate, the newspaper had a Plan B for getting Trump that included the 1619 Project.

Critics said the president’s move was a transparent play for white votes with less than two months until the Nov. 3 election.

Why are white people still allowed to vote? Shouldn’t their votes be taken away until 2619 as part of the Racial Reckoning?

“To say antiracism is anti-American is to say racism is American, which is to say Trump wants white Americans to be racist,” said Ibram X. Kendi, the author of “How to Be an Anti-Racist” and director of the Boston University Center for Antiracist Research. “And that’s precisely the point. He’s relying on manipulating the racist fears of white voters to win them over. Once white people lose those fears through interventions like trainings, Trump loses their votes.”

As long as whites are still permitted to vote, we must have taxpayer-funded interventions to train them not to vote for the Wrong Candidates.

By the way, one of the Diversity Trainers whose taxpayer-funded gig got canceled was Uncle Tim himself, Tim Wise:

1/ I was one of those whose planned training w/a government agency was stopped at the last minute by the Administration, even before this policy was announced, like 6 weeks ago. Interestingly, I wasn't going to say any of the things Trump suggests these trainings entail...