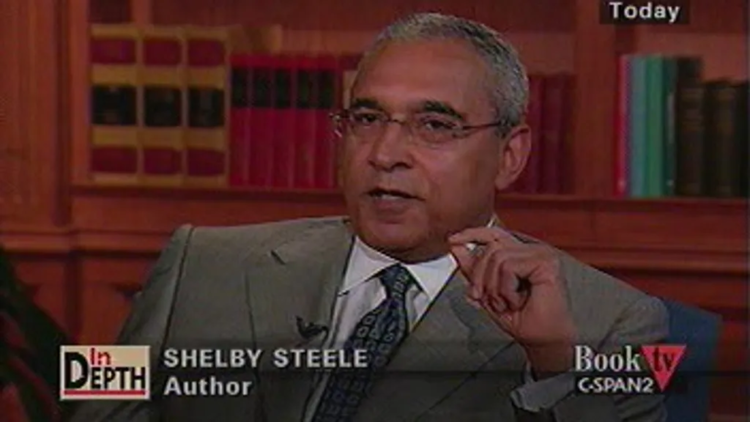 Shelby Steele writes in the WSJ on the central issue of the 2012 election:

What gives Mr. Obama a cultural charisma that most Republicans cannot have? First, he represents a truly inspiring American exceptionalism: He is the first black in the entire history of Western civilization to lead a Western nation-and the most powerful nation in the world at that. And so not only is he the most powerful black man in recorded history, but he reached this apex only through the good offices of the great American democracy.

Thus his presidency flatters America to a degree that no white Republican can hope to compete with. He literally validates the American democratic experiment, if not the broader Enlightenment that gave birth to it.

He is also an extraordinary personification of the American Dream: Even someone from a race associated with slavery can rise to the presidency.

The Obama lineage was associated with slavery in the sense that they sold slaves to the Arabs, but who cares about details?

Whatever disenchantment may surround the man, there is a distinct national pride in having elected him.

All of this adds up to a powerful racial impressionism that works against today's field of Republican candidates. This is the impressionism that framed Sen. John McCain in 2008 as a political and cultural redundancy-yet another older white male presuming to lead the nation.

The point is that anyone who runs against Mr. Obama will be seen through the filter of this racial impressionism, in which white skin is redundant and dark skin is fresh and exceptional.

This is the new cultural charisma that the president has introduced into American politics.Â Today this charisma is not as strong for Mr. Obama. The mere man and the actual president has not lived up to his billing as a historical breakthrough. Still, the Republican field is framed and-as the polls show-diminished by his mere presence in office, which makes America the most socially evolved nation in the world. Moreover, the mainstream media coddle Mr. Obama-the man-out of its identification with his exceptionalism.

Conversely, the media hold the president's exceptionalism against Republicans. Here is Barack Obama, evidence of a new and progressive America. Here are the Republicans, a cast of largely white males, looking peculiarly unevolved. ...

How can the GOP combat the president's cultural charisma? It will have to make vivid the yawning gulf between Obama the flattering icon and Obama the confused and often overwhelmed president. Applaud the exceptionalism he represents, but deny him the right to ride on it as a kind of affirmative action.

A president who is both Democratic and black effectively gives the infamous race card to the entire left: Attack our president and you are a racist. To thwart this, Republicans will have to break through the barrier of political correctness.

Mr. McCain let himself be intimidated by Obama's cultural charisma, threatening to fire any staff member who even used the candidate's middle name.

Okay, but for America to not re-elect Obama would be tantamount to recognizing him as a guy who rode affirmative action to the top, with a massive push from the press, then proved inadequate. That's not a narrative the media is going to like. The media will actively work to prevent that from happening. Let's look back in history for examples of one-term black leaders. The most obvious is David Dinkins, first black mayor of the media capital of New York. His election was of some symbolic importance, too.

Yet, why did Dinkins fail of re-election? There were a number of reasons, but the key, almost certainly, was the black anti-Semitic riot in Crown Heights that Dinkins didn't seem to take seriously. Since then, New York voters haven't elected a Democratic candidate mayor in the last five mayoral elections. Dinkins' term has largely been dropped down the media memory hole.

You almost never read in the press about how white racism stole a second term from Dinkins. This major historical event in the recent past of the capital of the world is just not the kind of thing it's appropriate to mention in New York media circles. They are in favor of blacks succeeding in politics in general, but not as mayor of where they live. This can help explain the Republican enthusiasm this week for the notion they can somehow ride Bibi Netanyahu's coattails in 2012 and thus turn Obama into Dinkins.

How exactly would that work in a world where Bibi really can't run for President?

I noticed that two days ago, Rep. Eric Cantor was telling Rep. Paul Ryan to get into the Presidential race:

But after yesterday's disastrous special election defeat for Republicans in upstate New York fought in large part over Ryan's plan to privatize Medicare, Ryan's luster has dimmed. So, why not reverse the polarity and have Ryan tell Cantor to jump in the race?