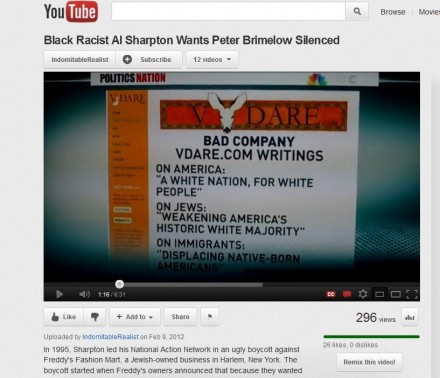 This is of course not a real page on VDARE.com, but the quotes are real, dragged way out of context. Below are links to the originals, so you see for yourself. For example, Sam Francis was talking about past, in the 1930s, when America was deporting Mexicans because there was a Great Depression on:

“There is in fact virtually nothing about the old America that did not reflect what today are almost universally denounced as "widespread racist attitudes." America was defined—almost explicitly, sometimes very explicitly—as a white nation, for white people, and what that means is that there is virtually no figure, no law, no policy, no event in the history of the old, white America that can survive the transition to the new and non-white version.”

“One example: overwhelming Jewish support for non-traditional immigration, which has the effect of weakening America's historic white majority.”

Heidi Does Long Beach: The SPLC vs. Academic Freedom By Kevin MacDonald on November 14, 2006

“Bottom line: The sharp bifurcation between foreign and native-born employment trends hinted at in the monthly figures is even more evident—and explicit—in the longer term.

The only answer: an  immigration moratorium—now.”

National Data | July Jobs: Americans Are the Biggest—and Only—Losers. Moratorium Now! By Edwin Rubenstein on August 6, 2010 at 12:00am