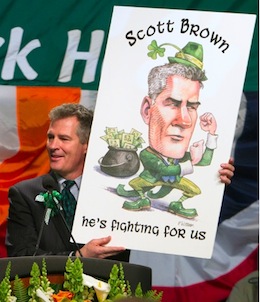 In an economy where at least 14 million American citizens are officially unemployed, the last thing we need in a new visa program admitting more legal immigrants to compete against jobless citizens for scarce jobs.

But certain members of the Senate think that additional thousands of foreign workers would be a swell idea.

Sadly, Republican Scott Brown (R-Massachusetts), who opposed the execrable DREAM Act, is sponsoring the Irish immigration bill. The photo shows Brown at a recent St. Patrick’s Day Breakfast in Boston, with a poster depicting him as fighting for the Irish.

He might think instead about fighting for the Americans.

WASHINGTON – Congress may have finally found an immigration issue it can agree on in an election year: letting in more Irish people.

At a time when the volatile issue of comprehensive immigration reform is hopelessly stalled in a divided Congress, senators of both parties are rallying behind legislation that would allow 10,500 Irish nationals to come to the U.S. to work each year.

The legislation by Sen. Scott Brown, R-Mass., has been attacked by critics as a cynical ploy to win Irish-American votes as Brown battles for re-election in a state where one in four residents is of Irish descent. It also has been decried by both pro-immigration and anti-immigration groups as an example of favoritism toward European immigrants over Hispanics and Asians.

But supporters of the bill — including Democratic Sen. Chuck Schumer of New York — say they are trying to help reverse discrimination against Irish nationals that was inadvertently created by a 1965 overhaul of the U.S. immigration system.

That overhaul, designed to end a bias against immigrants from Latin America, Asia and Africa, made it difficult for Irish immigrants to obtain visas despite their strong cultural ties to the U.S., supporters of Brown’s bill say. Hispanics and Asians have been the dominant immigrant groups to the U.S. since 1965 and, as they become citizens, their close family members have been given priority for U.S. visas as part of the U.S. government’s emphasis on family reunification.

Frank Sharry, founder and executive director of the immigrant rights’ group America’s Voice, has no quarrel with the Irish visa bill but resents Brown’s opposition to measures that would benefit Latinos and other immigrant groups.

“The bill is actually a modest and sensible measure, and the Irish-American community has fought very hard for immigration reform that would benefit everyone,” Sharry said. “We consider them close friends. But I think what Scott Brown is doing smacks of shameless opportunism. He’s pandering to the Irish to say, ‘I’m your candidate,’ and he’s pandering to the tea party by showing that he’ll fight for white immigrants but not brown ones.”

Brown’s spokesman said the senator cares about all immigrants and supports a bipartisan House-passed immigration bill that would remove the current limit on the number of legal permanent residents who may be admitted to the U.S. in any given year from a single country. The bill would benefit all nations, but especially those countries with the greatest numbers of people waiting for U.S. visas: China, India, Mexico and the Philippines.

“For decades, the Irish have been unfairly shut out by our immigration laws while immigration from many other countries has sharply increased,” said Brown’s spokesman, John Donnelly.

Brown’s bill would make Irish nationals eligible for a special visa program created in 2005 to allow up to 10,500 high-skilled Australians to come to the United States on temporary work visas known as E-3 visas. The program grew out of a trade pact with Australia, but it was also seen as a reward for a country that supported U.S. military action in Iraq and Afghanistan.

The program allows skilled workers with job offers from U.S. employers to get a two-year work visa that can be renewed indefinitely. Workers with an E-3 visa can bring their spouses and children with them. Their spouses also can work legally in the United States.

While the broader visa reform bill has stalled in the Senate, Brown’s bill appears poised to move forward. After initially opposing the legislation for favoring just one country, Sen. Chuck Grassley, the senior Republican on the Senate Judiciary Committee, has decided to stop blocking it provided that Brown makes a few changes in the bill. Those changes are being negotiated among Brown, Grassley and Schumer, who chairs the immigration subcommittee.

Roy Beck, executive director of NumbersUSA, which wants to reduce immigration, said Brown’s bill will end up hurting American workers of all races and ethnic backgrounds.

“Why would you want to bring in 10,500 more foreign workers at a time when we’ve got 20 million Americans who either can’t find jobs or are forced to take part-time jobs when they want to work full-time,” Beck said. “Brown’s bill is about pandering.”