While much of Washington wrings its hands about how kindly to treat “Americans” who have fought for the headchopper ISIS bunch in the Middle East, Ted Cruz has a better idea, namely to turn the Islamic State into a roach motel as far as US citizens are concerned: you can get in, but you can’t get out, at least to the United States.

Below. ISIS fighters are bloodthirsty even by Islamic standards. 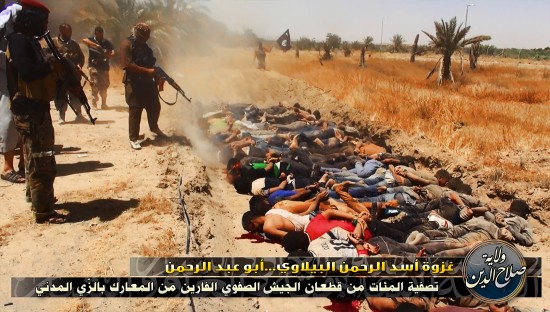 It was reported in September that 40 Americans have already returned to the US from fighting for ISIS. However, we are supposed to be reassured that they are being surveilled by the FBI to keep track of them.

The bill is called the Expatriate Terrorist Act and is being concurrently introduced by Iowa Congressman Steve King.

Sen. Ted Cruz (R., Texas) will file legislation on Friday to ban American citizens who fight alongside the Islamic State (IS) and other terror groups from returning to the United States, where they pose a significant terror threat, according to sources in the senator’s office.

Cruz, who first proposed the legislation last year, seeks to strip those Americans who travel abroad to fight with IS (also known as ISIL or ISIS) of their U.S. citizenship rights and stop them from coming back stateside.

The bill, known as the Expatriate Terrorist Act (E.T.A.), tightens and updates existing regulations by which a U.S. citizen effectively renounces his or her citizenship.

Cruz said that he is filing the bill partly in response to President Obama’s Tuesday State of the Union address, which he described as “detached from reality” on the foreign policy front.

“President Obama’s approach to foreign policy refuses to acknowledge the threats our enemies pose to our national security—it is detached from reality and making the world a more dangerous place,” said Cruz, who also is releasing a new video that takes aim at Obama for misleading the nation about these threats in his annual address.

“We’ve seen the grave consequence of the Obama-Clinton-Kerry foreign policy unravel with respect to Iran, Russia, and now Yemen,” Cruz said. “These consequences are not confined to faraway lands. They directly threaten America and our allies.”

“That is why this week, I am re-filing the Expatriate Terrorist Act, which prevents Americans who have fought abroad for designated terrorist groups from returning to the United States,” he said. “I look forward to working with senators on both sides of the aisle on this and additional measures to secure our nation and restore America’s leadership in the world.”

In his new video, an advance copy of which was provided to the Free Beacon, Cruz makes the case that Obama’s statements on the foreign policy front do not comport with reality.

From Iran to Russia, Yemen, and beyond, Obama painted a picture of his actions that do not comport with the truth on the ground. Multiple media outlets noted after the address that Obama’s remarks were “not close to reality.”

In the wake of the attacks in Paris and in the midst of upheaval in Yemen, the president refused to utter the words “radical Islamic terrorism.”

Regarding Iran, Obama said on Tuesday, “Our diplomacy is at work with respect to Iran, where, for the first time in a decade, we’ve halted the progress of its nuclear program and reduced its stockpile of nuclear material.”

Cruz’s video, called “It’s Time to Face Reality,” points out that Iran is continuing work on new nuclear reactors and still enriching uranium, the key component in a nuclear bombs.

It also challenges Obama’s statements on Russia, Yemen, and the fight against terrorism.