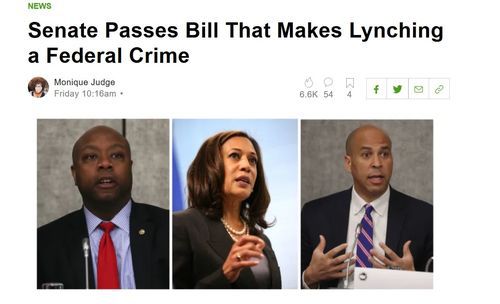 On Thursday, the U.S. Senate passed a bill that would make lynching a federal crime.

The bill, which was introduced in June by Sens. Kamala Harris (D-Calif.), Cory Booker (D-N.J.) and Tim Scott (R-S.C.), had previously passed in the Senate in December, but did not pass in the GOP-majority House before the end of the 115th Congress. The Hill reports that the bill passed Thursday with a voice vote.

While discussing the bill, Booker cited the recent reported attack in Chicago against actor Jussie Smollett of Empire fame and said that “lynching is not a relic of the past.”

.@JussieSmollett is one of the kindest, most gentle human beings I know. I’m praying for his quick recovery.

This was an attempted modern day lynching. No one should have to fear for their life because of their sexuality or color of their skin. We must confront this hate. Lynching is definitely the # 1 crime threat facing our nation. So very good news. I’m hoping Congress passes a new horse thieving and cattle rustling bill as well. We need relief on that front and badly. Also a bill against Irish draft riots might be useful.

And like how we need a federal law against selling liquor to reservation Indians.

Oh, wait, that actually still is a problem.