Two decent immigration enforcement bills were crushed by Democrats in the Senate Wednesday, revealing how far the party has gone down the road of open borders for political gain. Both bills required 60 voted to proceed to debate in the Senate, but Democrats batted them down with few dissenters: see the names here. One measure (S. 3100) would have blocked certain federal funding for sanctuary cities, which sounds like a no-brainer to anyone not a Democrat. The other was Kate’s Law (S. 2193), promoted by Bill O’Reilly and others, would have imposed a mandatory minimum 5-year prison sentence on repeat border crossers. That bill was named for Kate Steinle, a victim of an undeported illegal alien criminal who was protected by San Francisco’s stubborn sanctuary policy.

Kate Steinle (pictured below) was shot dead July 1 2015 as she strolled with her father on a popular San Francisco pier. The man who confessed to her killing is an illegal alien Mexican who was deported five times, but returned to the alien-friendly sanctuary city.

Unfortunately, this news may get lost in all the Comey testimony today about the Clinton emails. 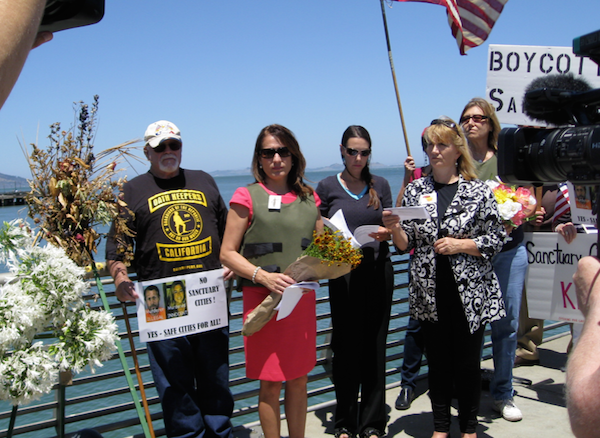 It’s particularly shameful that Senator Feinstein voted against public safety, since she was once the mayor of San Francisco and her Pacific Heights mini-palace is only a couple miles from the pier where Kate was shot.

The votes were taken slightly more than a year after the slaying of Kate Steinle, whose death at the hands of an illegal immigrant shielded by San Francisco’s sanctuary policy ignited a fierce debate over localities’ laws that limit or ban police from turning over immigrants to federal deportation officers.

Steinle’s death on July 1, 2015, drew attention to victims of illegal immigrant crime — a part of the debate that is often overlooked.

“Republicans are legislating Donald Trump’s vision that immigrants and Latinos are criminals and threats to the public,” Mr. Reid said.

He led Democrats in blocking the sanctuary bill, which fell seven votes shy of the 60 needed to override his filibuster, and the mandatory minimum bills, which fell five votes shy.

The man who killed Steinle had been repeatedly deported but sneaked back into the U.S. each time. He served a term in federal prison and was released to San Francisco, which asked to prosecute him on a years-old drug warrant.

Local prosecutors ultimately decided to drop the case rather than return the man to federal agents who wanted to deport him. The sheriff’s department, following the county’s sanctuary policy, released him.

“This is madness,” said Sen. Patrick J. Toomey, the Pennsylvania Republican who proposed the crackdown on sanctuary cities, including Philadelphia in his home state.

Mr. Toomey’s bill would have denied some federal criminal justice grant money to localities that refused to cooperate with immigration agents. Republicans said it made no sense to have taxpayers spend money on communities that refuse to work with the federal government.

The vote on his bill fell mostly along party lines, with two Democrats — Sen. Joe Manchin III of West Virginia and Joe Donnelly of Indiana — voting for the crackdown. A single Republican, Sen. Mark Kirk of Illinois, voted against the crackdown. Chicago helped pioneer the sanctuary city concept.

The legislation imposing a mandatory minimum sentence of at least five years on repeat illegal immigrants was more popular. Mr. Kirk voted with the other Republicans in favor of it, as did Mr. Manchin, Mr. Donnelly and Sen. Heidi Heitkamp, North Dakota Democrat.

“Americans are tired of politicians standing with violent criminal illegal aliens,” said Sen. Ted Cruz, the Texas Republican who sponsored the measure, which he named “Kate’s Law,” after Steinle.

Immigrant rights activists warned Democrats against cooperating with Republicans on the bills. The activists said the immigration system is so broken that nobody should be deported until Congress passes broad legalization of most illegal immigrants in the U.S.

The activists have rallied to defend sanctuary cities, arguing that local police break trust with minority communities when they report illegal immigrants to federal officials.

The Obama administration, meanwhile, has been internally divided on the issue. The chief of the deportation agency at one point welcomed a crackdown on sanctuary cities, saying that it was a public safety risk to release dangerous illegal immigrants.

But the White House quickly squashed that sentiment and insisted the problem was broken federal laws, not a patchwork of local policies.

U.S. Immigration and Customs enforcement says thousands of dangerous criminals it wanted to deport have instead been released onto the streets thanks to sanctuary policies.