The Senate Homeland Security Committee has released its own report on the 9/11 Benghazi terror attack that killed four, including our Ambassador. It looks more hard-hitting than a report that appeared a couple weeks ago, written by Ambassador Thomas Pickering and Admiral Michael Mullen for the Accountability Review Board, which even Bloomberg characterized as having “Big Holes.” 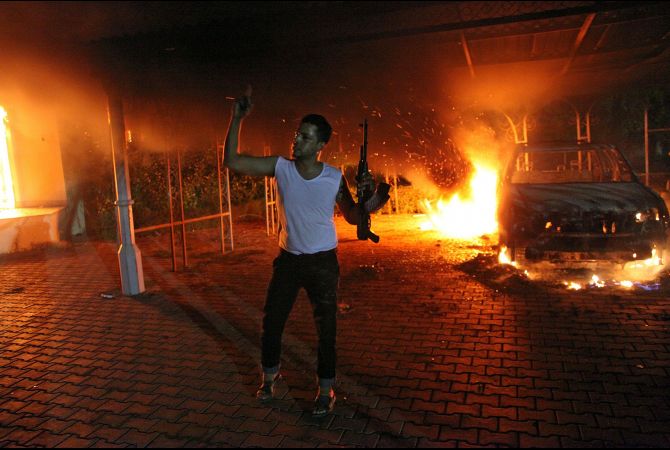 Senators Joe Lieberman and Susan Collins have done important work before, such as their investigation of the Fort Hood mass murder by the Muslim psychiatrist which told the truth about the killings (unlike the Pentagon’s politically correct whitewash). For details, see my blog Senate Report: Fort Hood Massacre Was Preventable.

Meanwhile, President Obama recently remarked that the Benghazi deaths were due to “just some sloppiness, not intentional, in terms of how we secure embassies. . .”

Although the language is polite, the big pointer of blame is aimed at the State Department:

Finding 6. The Department of State did not adequately support security requests from its own security personnel in Benghazi.

You can read “Flashing Red: A Special Report On The Terrorist Attack At Benghazi” online or download a pdf version from the Homeland Security Committee’s page of reports.

A scathing Senate committee report on the Benghazi terrorist attack faults the State Department for failing to adequately respond to mounting security threats in the lead-up to the assault. The report says the facility was woefully under-protected at a time when the region, according to a top department official, was “flashing red” — yet security was not improved, and nobody recommended the compound be shut down.

The report, produced by the Senate homeland security committee and obtained by Fox News, follows the release of a State Department-commissioned review earlier in the month. Both are highly critical of the department.

“It is so clear that (the Benghazi compound) is dangerous and what happened was due to extremely poor security,” Sen. Joe Lieberman, I-Conn., said Monday.

The Senate report noted the “large amount of evidence” in the months preceding the attack that Benghazi was “increasingly dangerous and unstable,” with an attack on Americans becoming “much more likely.”

“While this intelligence was effectively shared within the Intelligence Community (IC) and with key officials at the Department of State, it did not lead to a commensurate increase in security at Benghazi nor to a decision to close the American mission there, either of which would have been more than justified by the intelligence presented,” the report said.

The report said it was “widely understood” that the Libyan government could not adequately protect U.S. personnel, yet the State Department did not move to fill the “security gap.” The Senate committee said “no security standards” applied to the Benghazi post — there were “few meaningful physical barriers,” according to the report.

Despite the increasing threat in the region and the apparent vulnerability of the compound, the Senate committee said it appears nobody recommended closing the facility or even temporarily shutting it down. “That was a grievous mistake,” Lieberman said.

The investigation turned up details that show “a shocking irresponsibility to protect American diplomatic personnel in Benghazi,” Lieberman added.

The report also cites past internal State Department reports recommending security measures dating back years that were not widely implemented.

State Department Under Secretary for Management Patrick Kennedy told lawmakers that Libya and Benghazi were “flashing red” by the time of the attack, Lieberman said.