Here are two interesting examples of how the New York Times covers mass murderers when they aren’t dread white males.

The Mystery of Why a Foundering Football Player Killed a Family

A small city that bills itself as Football City U.S.A. is grappling with the shooting deaths of members of a prominent local family by Phillip Adams who, many say, had been adrift after his N.F.L. career ended.

He struggled to find work. His last-ditch chance to make an N.F.L. team fizzled. He had a child to support and little apparent direction in a life freighted with high expectations. His behavior was increasingly erratic. Then on Wednesday, for reasons no one yet knows for sure, Phillip Adams, a former N.F.L. cornerback, went to the Rock Hill, S.C., home of a prominent doctor and shot everybody he saw before fatally turning the gun on himself.

Now, the football-loving community of 65,000 that bills itself as Football City U.S.A. is struggling to contend with Adams’s suddenly violent turn and its aftermath.

Before he killed five people, including two children, and critically wounded a sixth person,

The cornerback’s six victims were all white, but who is counting?

Adams, 32, who shot and killed himself several hours after his rampage, had seemed adrift since he last played N.F.L. football almost six years ago, friends and associates said. He remained close to home, caring for his mother, Phyllis, a former high school teacher who became a paraplegic after a car accident a decade ago. 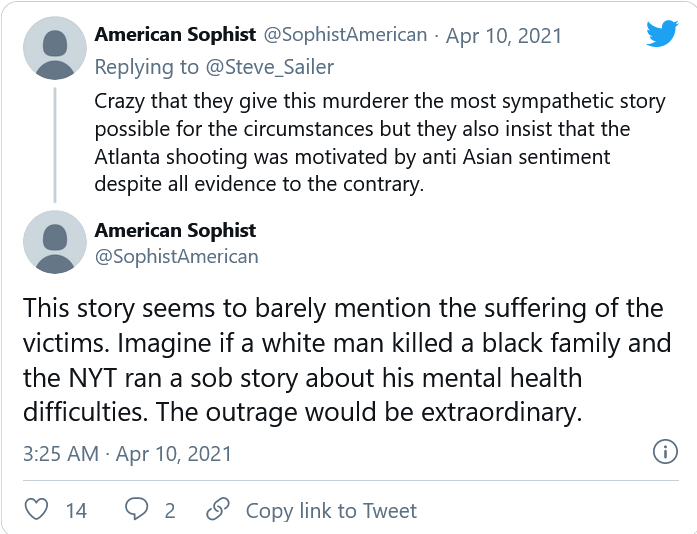 This story sounds rather like the Black Muslim ex-college football player who went crazy and murdered the white Capitol cop last week. Like I wondered then: lots of people go nuts or break down, especially black males, but is the Racial Reckoning making them more murderous?

Meanwhile, the NYT runs an article about the victims in Boulder of the Muslim immigrant terrorist. But this article refuses to even mention the shooter’s glaringly Arabic name.

‘I Know She’s Gone, but Why?’: Love and Loss at a Boulder Grocery Store

Funerals for the victims of the mass shooting in Colorado were being held this week. Teri Leiker, a beloved employee at the King Soopers store for 31 years, was among them.

BOULDER, Colo. — Teri Leiker and Clint Ponsford shared a love story that began and ended at the grocery store.

They spent more than 30 years working at the same King Soopers supermarket in Boulder, where Ms. Leiker charmed customers with her big laugh and Mr. Ponsford could spot the peaks of the Flatirons when he went outside to wrangle shopping carts. They had both competed in Colorado’s Special Olympics and helped each other get through a lot: deaths, a breakup and the challenges of navigating this world as two people with cognitive disabilities.

About a year and a half ago, their friendship turned into something deeper. They went on karaoke dates. They watched Disney movies that Ms. Leiker adored. On workdays, they would get up at 3:30 a.m. in Ms. Leiker’s condo to make coffee, trade kisses and watch reruns of “Murder, She Wrote” before Mr. Ponsford left for the early shift.

And on March 22, they were both at work when it was all blasted apart.

For a few fleeting days, the country’s horrified gaze was fixed on Boulder after Ms. Leiker, 51, and nine other people at the King Soopers were killed by a 21-year-old gunman whose motives remain a mystery.

But that’s it: the entire article doesn’t mention the identity of the shooter.