Saudi Spy Is Busted for Stealing Info on US Aircraft Carrier 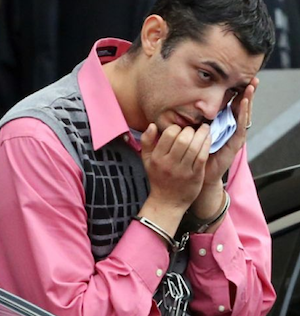 The Obama administration must hand out security clearances with the same generosity as it does amnesty for illegal aliens, judging from the recent arrest of a Saudi engineer, Mostafa Ahmed Awwad (pictured in handcuffs), for espionage.

He worked in the Norfolk Naval Shipyard’s nuclear engineering and planning department after being hired earlier this year and receiving a clearance a few months later.

According to the Washington Times, “Awwad was born in Saudi Arabia, married a U.S. citizen in Cairo in 2007 and took steps to become a U.S citizen.”

Apparently marrying an American was sufficient to bypass any qualms about national security and get him a job working on critical US weapons.

Have the big security experts in Washington forgotten about a little event in 2001 where 15 of the 19 9/11 hijackers were Saudis?

A Saudi-born U.S. Navy engineer working on a top-security assignment was nabbed by federal agents and charged on Friday with espionage-related crimes as a result of his attempt to steal classified schematics for what is arguably the most advanced aircraft carrier ever built. The warship is now being constructed in Newport News, Virginia, according to federal indictment documents.

The suspect, 35-year-old Mostafa Ahmed Awwad was working at the Norfolk Naval Shipyard and intended to send the schematics for the project to Egypt, according to agents with the Federal Bureau of Investigation. He was indicted on two counts of attempted exportation of defense articles and technical data and faces a total 40-years imprisonment.

Awwad worked in the nuclear engineering and planning department at the shipyard, having begun working at there in early 2014. His security clearance gave him extensive access to information on Naval nuclear propulsion systems. But many counterterrorism and counterintelligence professionals are wondering how a foreign national from a nation that hosts a large number of Islamic terrorists can get so close to a classified operation such as building an aircraft carrier reputed to dwarf any nations’ warships.

“What kind of vetting process was used before hiring a man who owes allegiance to Saudi Arabia, a major exporter of radical Islam known as Wahabbism? Did the Obama administration learn nothing from the Edward Snowden or pre-sex change Bradley Manning incidents that severely hurt U.S. national security?” asked former police counterintelligence analyst Bernard Pollis.

Court documents describe how an FBI undercover agent posing as an intelligence officer from Egypt’s spy agency called the Mukhabarat secretly met at a secluded hiking trail which was to be used as a “dead drop” for communications between the two men. The undercover agent also told Awwad that he would provide a pinhole “spy” camera in order to photograph the classified U.S. Defense Department material.

The undercover agent, who spoke fluent Arabic, convinced Awwad he was helping his fellow Arabs and during a meeting in October at a hotel Awwad described how he planned to compromise the U.S. Navy computer system’s security by installing software enabling him to copy documents without sounding a cyber alarm. During the conspiracy, the undercover agent was given aircraft carrier drawings marked with warnings that foreign distribution could result in criminal prosecution.

During the planning of the theft of classified schematics, Awwad was told that the computer drawings of the state-of-the-art warship would be used in Egypt. He also told the undercover agent that he needed a fake Egyptian passport so Awwad could travel without alerting U.S. government officials. He gave the man posing as an Egyptian spy photographs to be used to create the illegal passport and other identification documents.

On Nov. 28, 2014, Awwad while in his Navy office was observed holding what appeared to be aircraft carrier design documents as he placed then on his office floor and photographed them, the federal investigators claim. What disturbed federal investigators the most was Awwad explaining to the man he thought was an Egyptian intelligence agent how to sink the aircraft carrier with a missile.

More than a few counterintelligence experts believe is Awwad were sent to Guantanamo Bay, he may be persuaded to provide more information sans defense attorney. “In a perfect world, the Obama administration would have immediately transported the Saudi spy and find out if there is anymore information to be gleaned from him,” said Pollis. “But the Obama priority is closing Gitmo and national security be damned,” he added.