The Unsilenced Silence blog has a good graph of Asian v. white SAT scores from 1996 to 2010 in terms of gaps in standard deviations: 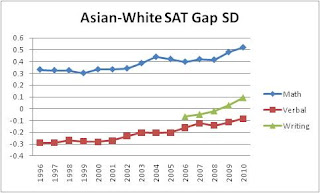 So, like most things involving test scores, the gap was stable in the  later 1990s. However, Asians improved through much of the 2000s, especially on the Writing test, a new section of the SAT that strikes me as easier to game because it uses subjective (but very quick) grading.

One possibility is that globalization of American colleges has led to more Asian-in-Asia elites having their kids take the SAT, which could be increasing the pool of smart Asians taking the test. I'm also concerned about test security, however, when the test is administered in Asia. The Graduate Record Exam has been plagued by instances of cheating in Asia. Also, the new Writing test is rather like the tests that the Chinese Empire conducted for millennia to pick mandarins.

Another possibility is that the legal immigration system is working in bringing in smart Asians, who are becoming a larger fraction of the Asian-American population over time. But what about regression toward the mean? Amy Chua is very smart, for example, but she's nowhere near as smart as her father, the conceptualizer of the memristor.

The take home lesson for Americans would seem to me to be that Americans shouldn't credulously trust assertions by the College Board / ETS / ACT that their tests can't really be gamed through test prep or other means. The SAT and ACT are, relatively speaking, very good tests, but we live in a highly competitive, globalized world full of people who are smart, hard-working, and less trusting and less believing in Fair Play than naive Americans.

Now, here's his graph of the white-black SAT gap, which has been widening: 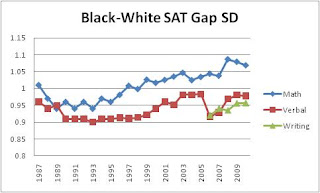 The sharp decline on The Gap in  2006 on the Verbal test (renamed Critical Reading) may have something to do with changes in that test, perhaps intended to make it easier on blacks. But, the general trend has been for The Gap to get worse, especially since the early 1990s. Yet, since the early 1990s (the Crack Years) were not a halcyon period for young blacks, the widening of the gap probably reflects concerted efforts since then by the Great and the Good to get more blacks to take the SAT (scraping the bottom of the barrel harder).

The process might work like this: the University of California, prevented from using racial quotas by Prop. 209) demands changes in the SAT Verbal that it hopes will boost black and Hispanic scores. A small amount of initial success in narrowing The Gap, however, leads elites to then over-confidently subsidize more black test-takers. Scraping the bottom of the barrel harder drives The Gap in Verbal back up, and increases The Gap in the other two sections to new heights. (Or I may be over-interpreting this.)

Also, it's likely that as test prep and gaming of the SAT has increased, that whites have benefited more from this than blacks. My mental model of who is doing more and more effectual test prep is Asians > whites > blacks and/or Mexicans > Other Hispanics (many of whom just arrived from Guatemala and are pretty clueless about the kinds of things that lead to higher scores that seem obvious to, say, a Hong Kong Chinese family in San Marino, CA).

Anyway, the White-Black gap graph shows the stability in gaps that is the overwhelming main lesson of generations of test score studies. Despite intense efforts by society since the mid-1960s, we still see about a one standard deviation gap between whites and blacks on a host of tests of cognitive ability (La Griffe du Lion's Fundamental Constant of American Sociology). But, that makes the recent change in Asian v. white scores even more interesting and more deserving of study.