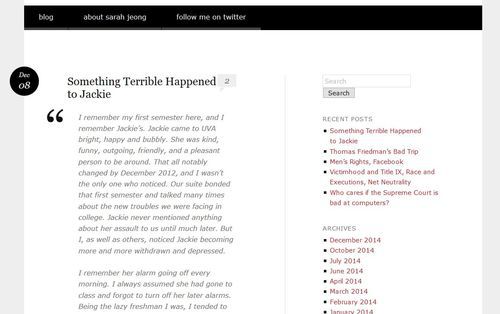 From the Wayback Machine archive of SarahJeong.net:

Something Terrible Happened to Jackie

… You can believe rape allegations are being exploited for political and ideological reasons, that the outlet in which the story is being told is not reliable for any number of reasons—biases, ethical breaches, failures of fact-checking. But it doesn’t negate that it happened. That someone was raped. That something terrible happened to them.
***
I keep getting bogged down in the details of Jackie’s “unraveled” story. The party that wasn’t on the fraternity calendar. The date that wasn’t a fraternity brother. The wrong time of year for pledging. The more I see these “inconsistencies” and “discrepancies” touted as evidence of falsehood, the more convinced I am that Jackie is not lying. I go over them again and again in my head. I keep starting this conversation with my boyfriend. He tells me that that’s not even the point—the issue isn’t with Jackie’s story, the issue is with Rolling Stone’s decision to run the story without Jackie’s willingness, their failure to properly fact-check. I know, I know, I know, and yet I’m still stuck on the details, the way I’m still stuck on, “I’m wearing you.”

I believe Jackie. It’s a different kind of believe from believing that her story is a historical, factual account. But she’s not lying. Her story is one she’s pieced together through a haze of agony, even as every neuron in her brain worked to forget what had happened. She didn’t know her date’s actual affiliation with the fraternity. She didn’t even know which fraternity it was. (She says herself that she later pointed the building out to a friend, and the friend identified it for her).

Say there was loud music playing, and people drinking at the frat that night. Not a party, just a little get-together. Just a small something. But then people bring their friends and their friends call their friends and everyone BYOBs and now you have something that looks like a party to a naïve girl unfamiliar with the fraternity system, but of course it’s not a party—no one issued any Facebook invites let alone put it on the official calendar.

It’s loud enough that no one will hear her cries. It’s small enough that her assaulters aren’t afraid of random people wandering in. She hears some of her attackers shouting orders to the others. Later, she concludes it must have been an initiation of some kind.

Those details blur. What does not blur is, “Grab its motherfucking leg.”

***
I’m making shit up now. Maybe Jackie has gotten things more fundamentally wrong than that. It happens to survivors with PTSD. It’s something that’s well-documented, something that’s described with perfect clarity by Amanda Taub. There’s no way for me to know for sure. And yet instead of having doubt creep in, I’m transfixed on “Grab its fucking leg.” It’s clearly an important memory for her, based on both the Rolling Stone and the Washington Post articles. There’s something about it that’s the key to the entire thing for her—this terrible, bewildering, horrible, fundamentally un-understandable thing that happened.

It’s the same line that led Richard Bradley to call bullshit on the Rolling Stone story.

It was fiction, and too horrible to be real. Too terrible to have happened. Too outrageous to be believed. These men, too monstrous to be University of Virginia fraternity members.
***
I shouldn’t say monstrous. Rape is not some rarified, exotic crime. It’s all around us. Our rapists are acquaintances, family members, boyfriends, girlfriends, partners, spouses, trusted friends. Rapists are people, not fictions.
I think about “Grab its motherfucking leg.” I still want to say monstrous.
***
There’s a tendency to mythologize the rapist into nothingness. He can’t be a rapist. He’s too nice. He’s too kind. He’s too handsome. He’s too famous.
How can she be a rapist? She’s a woman, and your partner at that.
They aren’t monsters, how can they be rapists?
And if the Rapist fades away into the realm of fiction, so does the Rape Victim. “Jackie is doing a disservice to the real rape victims,” you say.
Who are those? I want to scream. Not the ones who don’t struggle. Not the ones who never quite say no. Not the ones who drink. Not the promiscuous ones. And oh god, not the ones who do sex work.
Not the ones who accuse the famous and well-beloved. Not the ones who testify at trial. Not the ones who sue for money. Not the ones who don’t report. But not the ones who report to get famous.
Not the ones whose stories just don’t seem very extreme. Are you sure you didn’t want it? Not the ones whose stories are too extreme. But Silence of the Lambs was fiction.
Rape happens, but none of these are rape victims, and none of those they accuse are rapists. Somewhere, there is an ideal victim and an ideal perpetrator. But not here, not in the messy inconvenient spaces where victims aren’t golden-haired princesses snatched out of their towers and rapists aren’t nameless moral black holes with no past and no future, with only THE RAPE as the defining characteristic of their entire existence.
***
You can’t tell anyone. The system is designed to preclude the existence of your rape. Let the Title IX office wave its hands blandly. Let the police lose your rape kit. Let the prosecutor drop your case. And the journalist….
***
Of course no one should even be looking at the details. No one should be assessing Jackie’s truthfulness. The matter should have ended with Rolling Stone’s own failure. But the details stick out to me, nonetheless. Watery and weak “counterevidence” that picks away at mundanities like dates and times, that comes prepackaged in transparently selective denials on official letterhead.
Those details shouldn’t matter to me. But they matter enough to others, to men who were waiting in the wings, ready to scream LIAR, to post Jackie’s name and picture and address on the Internet, to present this as evidence of feminism gone too far.
And that’s why the details matter. They aren’t convincing, which means these people were ready to be convinced, ready to be knocked over by a feather. These aren’t people who are interested in finding the truth or in seeking justice. Well, I suppose, not insofar as I think of the truth or I think of justice. But I suppose not everyone thinks of justice the way I do.
In law school, after all, we learned that due process is what we get in lieu of justice. And what’s due process besides a series of rules that are meant to keep things as predictable as fucking possible?
But this is not the part where I complain about the legal system (though the legal system has certainly failed rape victims). It’s the importation of pretend legal standards into our everyday discourse, the slippery contortions of constitutional guarantees in order to come out with what we wanted to say all along: “Jackie’s story had to be bullshit. In order to be fair we have to call her a liar. In the interests of justice, her rape cannot have ever existed.”
***
Something terrible happened to Jackie. I don’t know what it was. Her suitemate doesn’t know what it was. I don’t even know if it’s clear to Jackie. But something happened.
Just insisting on this is heresy, of course. Jackie’s reputation as a liar is sealed away by a fraternity events calendar.
They own the words. They own the law. They own reality or at least what everyone acknowledges as reality. They own the Truth™, the Truth that makes up how we understand our society—the truth of what happened with the Duke lacrosse players, the truth of the injured burglar who sued the property owner, the truth of the McDonald’s coffee that was too hot. (No, this isn’t the part where I link you to what really happened in those cases. Why would you care about what really happened, anyways?)
***
As long as they own the Truth, they own our bodies and what happens to our bodies because what happens to our bodies every day is impossible and unbelievable and please, you’re doing a disservice to real rape victims.
***
Grab its motherfucking leg.
Why would the same line that convinced Richard Bradley it can’t possibly be true, have a different kind of effect on me? He doesn’t believe in monsters, I suppose. But I realize now, I’ve accepted monstrosity is the human condition.

In contrast to Sarah Jeong’s True Believership, here’s my blog post from three days earlier about how the timeline of how the hoax collapsed:

On November 19th, Rolling Stone posted “A Rape on Campus: A Brutal Assault and Search for Justice at UVA” to immense acclaim.

On November 24th, veteran editor Richard Bradley asked on his personal blog Shots in the Dark “Is the Rolling Stone Story True?”

Below are the only comments made on Bradley’s post before I linked to his post on November 29th, after which the floodgates opened.

Then, my readers followed up with numerous insightful comments on Bradley’s blog on November 29th and 30th. On December 1st, articles started appearing citing Bradley’s post in places like Reason, the WSJ, and Jonah Goldberg’s column in the L.A. Times.

From December 2nd, onward, the Washington Post took the lead, actually doing new shoe leather reporting. The New York Times, however, published only one wishy-washy story about doubts, then on December 4th published a long article on the supposed rape culture crisis on campus and in the military, credulously citing the Rolling Stone story repeatedly.

Today, Rolling Stone has apologized for the article and the Washington Post has much new reporting about it.

So score one for the WaPo over the NYT.

And here’s my Taki’s Magazine article from earlier this week “A Rape Hoax for Book Lovers.”