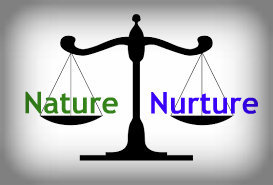 Sapolsky: Nature And Nurture Are Obsolete

In the 2014 Edge confab of clients of John Brockman, science book agent, seers and sages offer their views on: What scientific concepts should be put out to pasture? Robert Sapolsky argues against nature v. nurture as somewhat distinct concepts:

[Anti-] Heights And Lengths And Areas Of Rectangles

... But what I am focusing on [as bad] is a phrase that is right in the narrow sense, but carries very wrong connotations. This is the idea of "a gene-environment interaction."

The notion of the effects of a particular gene and of a particular environment interacting was a critical counter to the millennia-old dichotomy of nature versus nurture. Its utility in that realm most often took the form of, "It may not be all genetic—don't forget that there may be a gene-environment interaction," rather than, "It may not be all environmental—don't forget that there may be a gene-environmental interaction."

Uh, no, the dominant mindset in the second half of the 20th Century, one which still reigns implicitly on almost all parts of campuses other than those explicitly dealing with genetics, was that the burden of proof was on advocates of any role for nature.

The concept was especially useful when expressed quantitatively, in the face of behavior geneticist's attempts to attribute percentages of variability in a trait to environment versus to genes. It also was the basis of a useful rule of thumb phrase for non-scientists – "But only if." "You can often say that Gene A causes Effect X, although sometimes it is more correct to say that Gene A causes Effect X, 'but only if' it is in Environment Z. In that case, you have something called a gene-environment interaction."

What's wrong with any of that? It's an incalculably large improvement over "nature or nurture?", especially when a supposed answer to that question has gotten into the hands of policy makers or ideologues.

You notice how the phrase "nature or nurture" is now denounced as hopelessly simplistic by the ideological descendants of the simplistic and failed orthodoxy: "only nurture, never nature?" The moderates like Galton (coiner of the phrase "nature and nurture") who saw both as important turned out to be right. So now it's considered crucial to obfuscate this highly useful bit of conceptual shorthand.

For example, the Great and the Good now want to "fight inequality" through "universal pre-K public schooling." Leaving aside the overlooked issue of the enormous lag time in how the nurture of 4-year-olds will — even theoretically — have much impact on, say, the Forbes 400 (average age 66), this is very much of a nature-nurture question. The proposed policies of Barack Obama and Bill de Blasio are based on two assumptions:

- that the nature-nurture balance in 21st Century American life is tipped so far toward nurture that income inequality in several decades can be substantially affected by a change in nurture at age 4;

- the assumption that the nurture provided by American four-year-olds' loved ones is so far inferior to the nurture that would be provided by government employees that it's all worthwhile (an assumption, by the way, tested in boarding schools for the indigenous in Australia, Canada, and America in the early 20th Century with unencouraging results).

My problem with the concept is with the particularist use of "a" gene-environment interaction, the notion that there can be one. This is because, at the most benign, this implies that there can be cases where there aren't gene-environment interactions. Worse, that those cases are in the majority. Worst, the notion that lurking out there is something akin to a Platonic ideal as to every gene's actions—that any given gene has an idealized effect, that it consistently "does" that, and that circumstances where that does not occur are rare and represent either pathological situations or inconsequential specialty acts. Thus, a particular gene may have a Platonically "normal" effect on intelligence unless, of course, the individual was protein malnourished as a fetus, had untreated phenylketonuria, or was raised as a wild child by meerkats.

The problem with "a" gene-environment interaction is that there is no gene that does something. It only has a particular effect in a particular environment, and to say that a gene has a consistent effect in every environment is really only to say that it has a consistent effect in all the environments in which it has been studied to date. This has become ever more clear in studies of the genetics of behavior, as there has been increasing appreciation of environmental regulation of epigenetics, transcription factors, splicing factors, and so on. And this is most dramatically pertinent to humans, given the extraordinary range of environments—both natural and culturally constructed—in which we live.

But are the ranges of typical environments to be affected by Universal Pre-K all that enormous? At present, the handful of children discovered to be kept chained to the water heater in the basement are taken away and put in foster care for better nurture, so Universal Pre-K shouldn't be evaluated against worst case scenarios.

Reading between the lines of the countless articles about how poor children are 30 million words behind, it's clear that the picture that liberals have in their minds of whom Universal Pre-K will rescue from inequality are black children being raised by a combination of tired grandmothers and surly welfare mothers with the TV on and various babbydaddies and boyfriends showing up and then disappearing. That's not a good environment, but it's not being raised by meerkats either.

The impact of nature and nurture when it comes to evaluating the expected value vs. the cost of Universal Pre-K are very much empirical questions. But many prefer to obfuscate rather than to try to clarify.

The problem with "a gene-environment interaction" is the same as asking what height has to do with the area of a rectangle, and being told that in this particular case, there is a height/length interaction.

Let's look at a rectangular analogy to Universal Pre-K. You are a downtown real estate developer. The most desirable block downtown is covered with skyscrapers doing a booming business, except for one parking lot with a street frontage of 100 feet in length. (This is, unfortunately, a 3d analogy, so let's just assume away the third dimension for the sake of simplicity: Assume the depth of the parking lot is the same as the depth of all the neighboring skyscrapers on the block and you would build over the entire depth.) The owner offers the parking lot for sale for $10 million. Do you buy it?

Professor Sapolsky then calls you up to explain that it is boring and trivial to think about height/length interaction and that all the most sophisticated thinkers are far beyond that.

You hang up on him.