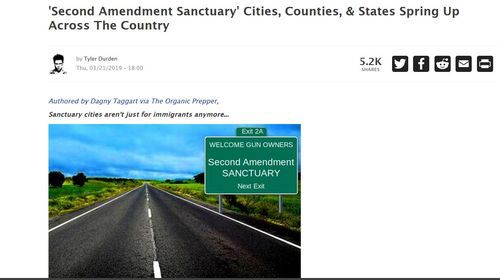 Why do we tolerate "sanctuary cities" in which municipal  governments won't cooperate with federal immigration authorities?   These municipal leaders openly flout immigration law.

If LA and Chicago and New York decide they don't want to obey immigration law, why can't my home town opt out of environmental laws, for example?  What if my county doesn't want same-sex marriage? Does it work with other laws?

Some municipal, county and even state governments are concerned about federal gun-grabbing and are coming up with their own "sanctuaries".

Tyler Durden of Zero Hedge has an interesting report on the topic:

A growing number of states, counties, cities, and towns are declaring themselves “Second Amendment Sanctuaries” and are refusing to enforce gun-control laws that infringe on the Constitutional right to keep and bear arms.  While adopting ordinances and resolutions to defy gun laws isn’t a new tactic, momentum is rapidly building – likely in response to increasing calls for more gun control at state and federal levels.

This gets us into constitutional questions, federal and state relations, and even the urban/rural divide. And demographics.

Sanctuary counties and towns are passing resolutions that state no funding will be used to enforce unconstitutional laws and that the sheriff will uphold his oath to the Constitution instead of enforcing laws that violate the Second Amendment.

COLORADO In Colorado, 23 out of 64 counties have adopted Second Amendment Sanctuary resolutions, and others are considering implementing similar resolutions. Legislators and sheriffs in the state are pushing back against House Bill 19-1177, a red flag bill that will likely become law soon. For a full analysis and critique of this bill, give this a read: Kopel and Greenlee: Plenty of red flags in Colorado’s ‘extreme risk’ protection order bill. The article has more information on HB 19-1177.

ILLINOIS—To date, 63 out of 102 counties or municipalities in Illinois have adopted Second Amendment Sanctuary resolutions, and more are expected.

NEVADA—Sheriffs in Nye County and Eureka County have said they oppose new gun laws in the state and will not enforce them. Elko County may soon join Nye and Eureka – commissioners there plan to vote on a resolution to become a Second Amendment sanctuary county at a meeting on March 20. (A March 22nd AP article reports that "Four rural Nevada counties [Nye, Douglas, Elko and Lyon] are balking at a new state law calling for strict background checks, with elected lawmakers voting to join a "Second Amendment sanctuary" drive affecting sheriff's offices and statehouses in several Western U.S. states. The Lyon County Commission on Thursday followed the Nye, Douglas and Elko county boards voting to tell Democratic Gov. Steve Sisolak and the newly Democratic-majority state Legislature they believe gun owners should be free to share or sell weapons without undergoing strict new background checks due to go into effect in January.")

NEW YORK—After the NY SAFE Act was passed in 2013, some New York counties passed resolutions in opposition. There are currently 52 out of 62 counties with such resolutions, and the New York State Sheriffs Association sued to block the law.

NORTH CAROLINA—Cherokee county passed a resolution pledging not to authorize or appropriate funds to enforce laws infringing the right to keep and bear arms.

WASHINGTON—In late January, the state of Washington made the news when several sheriffs in the state publicly vowed not to enforce the new unconstitutional gun laws that were passed in November. As of February 2019, the sheriffs of more than a dozen of the state’s 39 counties have publicly stated they will not enforce the law, though some said they will only refuse to do so until the final adjudication of pending lawsuits against the legislation.

ALASKA—In 2013, Alaska passed HB 69, which declares certain gun control measures to be unconstitutional, and made it unlawful for any state assets to go toward the enforcement of federal gun laws...