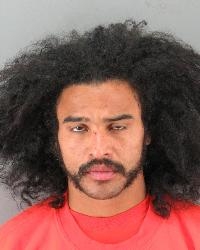 In San Francisco, the famously kind-to-criminals sanctuary city has released a naked illegal alien who attacked several people in a BART station. Yeiner Perez (pictured), a citizen of Colombia, can be seen on a video knocking down a woman and assaulting others.

But according to sympathetic reporting from the notoriously pro-lawbreaker San Francisco Chronicle, the guy is a just a victim of mental health issues and needs treatment, not deportation.

Perez is apparently back performing acrobat tricks in public, perhaps even wearing pants.

In a country that cared about public safety, an insane violent illegal alien would be repatriated immediately. But if that dangerous alien behaves criminally in San Francisco, he gets free treatment, and the public’s need for reasonable security in a community space is discounted. Perez merely faces “possible” deportation.

The video below (with the naked bits pixed out) shows what a dangerous character was released.

Yeiner Perez, 24, was arrested May 10 at the 16th Street Mission station after a incident in which he did handstands, flips and the splits on station turnstiles. He also lunged at and grabbed several passengers, as shown in a video recorded by a station agent.

The San Francisco District Attorney’s office is still weighing whether to charge Perez, but his arrest alerted federal immigration authorities to his presence and set in motion deportation proceedings.

Perez is from Colombia, said Slim Chance, the leader of a Berkeley circus troupe that Perez used to perform with. Immigration officials said he is not a U.S. citizen and is in the country illegally on an expired visa.

After Perez was arrested, he stayed overnight at California Pacific Medical Center on an emergency psychiatric hold, then was passed into BART police custody. He was in jail for 48 hours but was released because BART investigators had not yet put together the paperwork needed for the district attorney to review the case for potential charges, said BART Deputy Police Chief Ben Fairow.

Perez was then taken into custody by Immigration and Customs Enforcement, which scans local arrest records for suspected immigration violators. He was released that day with a GPS anklet and required to check in regularly by phone and in person while his deportation case proceeds.

In the meantime, Perez has been seeing a therapist who agreed to treat him for free, said Chance, who believes Perez should also seek medical help. Troupe members suspect he had a stroke-like episode last year, which temporarily caused part of his face to be paralyzed. And Chance was struck by a similar appearance in Perez’s mug shot.

Interestingly, an earlier report from the Chron was more precise about the assaults committed by Perez.

A video emerged Monday depicting a bizarre incident at a San Francisco BART station last month, with a naked man accosting several passengers and doing flips, handstands, the splits and other gymnastic maneuvers on the BART turnstiles.

The video, recorded May 10 by a BART station agent at the 16th Street Mission Station, shows the man lunge at and attack several passengers, and at one point pound the ground while passengers step gingerly around him.

The video also shows a BART maintenance worker trying to block the man from getting close to passengers. The station agent recording the video helps one woman, who is visibly distressed, hide from the man in the booth. [. . .]