San Francisco has a full plate of sanctuary-connected problems, including the increased threat to public health because of putting out the welcome mat for illegal aliens from around the world. One result is having more than three times the national rate of tuberculosis. 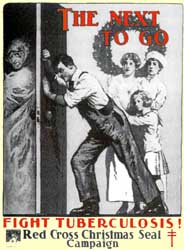 Tuberculosis is a bacterial infection which is passed through the air, so the crowded conditions common to illegal aliens are a perfect breeding ground for more cases to develop. Plus nearly a third of San Francisco residents are Chinese, and China is home to above-average rates of drug-resistant TB.

San Francisco gets about 120 cases of TB each year. That's about 14.6 cases per 100,000 people, which is twice the statewide rate and more than three times the national rate of 4.2 cases per 100,000. It's also the highest rate in the Bay Area, although several counties are also higher than the state and national averages.

The reason for the high rate of disease in San Francisco is because of the city's large foreign-born population. Most people who get TB were infected outside the United States, including countries where the disease is much more prevalent.

"Drug resistance is starting to be a very big problem. In the past, people stopped worrying about TB and it came roaring back. We need to make sure that doesn't happen again," said Dr. Thomas Frieden, director of the U.S. Centers for Disease Control and Prevention, who was himself infected with tuberculosis while caring for drug-resistant patients at a New York clinic in the early '90s. "We are all connected by the air we breathe, and that is why this must be everyone's problem."

The main reason for the re-emergence of infectious diseases once thought conquered has been the misuse of antibiotics, which has allowed drug-resistant mutations of pathogens to develop. It also doesn't help when persons with communicable diseases are not kept out at the border.