In the sanctuary city of San Franciso, illegal aliens feel especially free to compare their lawbreaking behavior to that of the holy family, which if not blasphemous is certainly arrogant. Specifically, Mexicans use their traditional posadas procession (now expanded into a play), which re-enacts Joseph and Mary unsuccessfully searching for an inn, as a way to whine childishly about American law and borders. (See Mexicans' Merry Posadas! for more about hijacking a religious custom for a political agenda.)

Mary and Joseph, as Illegal Immigrants, The Mission Blog, December 11, 2009

La Posarela, a bilingual musical play, re-enacts the biblical journey of a young couple who traveled from Nazareth to Bethlehem in search of a place to sleep with their first-born child Jesus.

But as told in the 45-minute play, free at 7 p.m. on Dec. 11 and Dec. 12 at the Community Music Center, the themes of homelessness, undocumented immigration and health care come to the fore.

"Ay, Jose. Maybe, after all, this city willÂ continue to be a sanctuary city forÂ illegal pilgrims like us," Ana Ortiz, who plays Mary, tellsÂ Joseph.

Rooted in the Mexican tradition of the bible narrative, La Posarela tells the story of Mary and Joseph going from inn to inn looking for shelter. Each time, they are turned away.

Note: Joseph and Mary were turned away because the lodging establishments were already full, since they were crowded with many people also traveling to be counted in the census. To that extent, the analogy holds up. As the late photographer Ansel Adams remarked, "When the theater's full, they don't sell lap-space."

Another interesting point of logical dislocation is how some of today's illegals propose to boycott the census, unlike Joseph and Mary who scrupulously followed the law.

The search symbolizes today's social perils — in the Mission District and across the country — of trying to find shelter and undocumented immigrants trying to belong, said Chus Alonso, the play's music director.Â It can also symbolize a person's search for the truth, he added. [...]

Luis De la Vega, who plays Joseph, said he enjoys sharing his heritage with others.

"When I was asked by my teacher if I wanted to participate, I said yes, this is a great way to showcase our Latino culture."

Yes, Luis, tell everyone about your Hispanic pride in the disdain for law.

"Arriba, Mary, we have an anchor baby!" exclaimed Mexican Joseph. 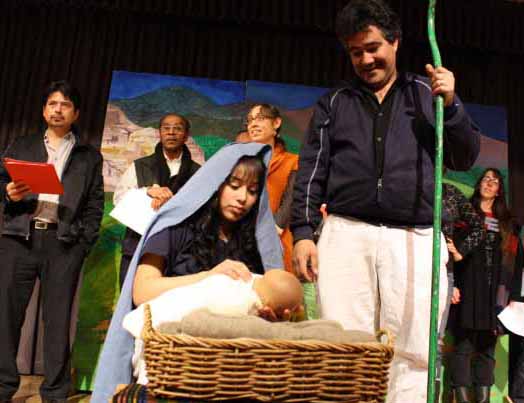