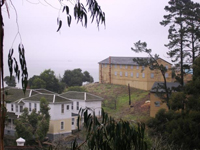 I like visiting Angel Island in the San Francisco Bay very much. You can take a BART train to the Ferry Building, then catch a boat out to the island. When I visited last summer, I did the 5-mile hike of the perimeter where the views of the Bay are unique and keep changing as you walk.

One change I noticed at that time was the sturdy fencing around the old Immigration Station—it was protected like Fort Knox, because of the expensive refurbishing of the place to emphasize the suffering of the Chinese immigrant wanna-bes.

It was called the Ellis Island of the West, but there is a major difference. Ellis Island welcomed immigrants from Europe "yearning to be free," as the inscription on the Statue of Liberty puts it. Angel Island's immigrants were mostly from China. And they were clearly unwelcome.

There's long been an exhibit on the island about its immigration station. Tuesday, State Park rangers showed off an expanded exhibit, which will open to the public Feb. 15. The centerpiece is a restored barracks.

The view out the windows to the north was glorious on a bright December day. But in those days, the doors were guarded, the windows were covered with escape-proof steel mesh, and the place has all the charm of a medium-security prison. [Bitter memories of Ellis Island of the West, By Carl Nolte, San Francisco Chronicle, December 11, 2008 ]

There's no mention of the cost to the taxpayers of the deluxe new shrine to victimhood.

The reader has to pay close attention to how people's experiences are described to understand that the "subterfuge" employed by the Chinese is outright fraud.

The immigrants had to resort to subterfuge to clear immigration. Wong's parents, Gee Seow Hong, his father, and Gee Theo Quee, his mother, had to lie about their relationship to get into the United States. Wong's father was the son of a citizen, but his wife was not a citizen herself. So she pretended to be Gee Seow Hong's sister, and that her daughter, Li Keng, was her niece.

Later, when the family lived in Oakland and Gee Theo Quee became pregnant, there were further complications, since the Gees were not exactly who they said they were.

So they paid a man named Wong and assumed his name. The family, which ran a restaurant in Oakland's Chinatown, had six daughters and a son, all of them named Wong.

Chinese were able to work this scam because the immigration records were destroyed in the San Francisco earthquake and fire in 1906—The Great Quake: Out of chaos came new Chinese America , [By Vanessa Hua, San Francisco Chronicle, April 13, 2006].

The attitude of many Chinese is that the Chinese Exclusion Act (1882-1943) was racist and therefore Chinese rationalize their lawbreaking as necessary, even though there is no right to immigrate. But the Chinese wanted to come to America to make money so they committed fraud, and now are complaining about being treated poorly on Angel Island.