In the San Francisco Bay Area, the Nov 7 oil spill from the China ship Cosco Busan was a big deal, with many beautiful beaches ruined for months if not longer. Now we learn the Coast Guard was slowed in its response by not being able to understand the Chinese perp crew—language diversity is our strength! 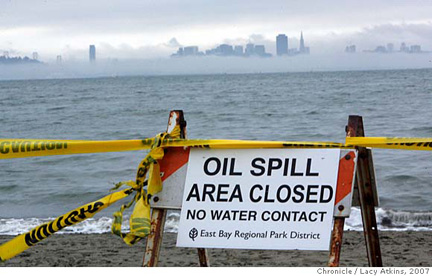 It occurred to me that airline pilots are required to speak English in order to fly into US airports — why isn't there a similar requirement for ocean-going shipping?

Actually, according to an LA Times article which was cited in VDARE.com at the time of the spill (see Oil Spill Raises Open-Borders, Open-Port Questions), "the captain and officers are required to speak English."

Right, I've heard some of that English spoken in Chinese restaurants, and always ended up with the Chef's Surprise.

Funny how some of these regulations work out in actual practice.

Coast Guard officials who boarded the Cosco Busan to determine how much oil had spilled into the San Francisco Bay had trouble communicating with the Chinese-speaking crew - and ultimately had to use drawings and hand gestures.

The new detail, contained in the first major report on the response to the Nov. 7 oil spill, helps explain why the Coast Guard came up with the faulty initial estimate of 140 gallons - far short of the 58,000 gallons that were later reported to have leaked into the Bay.

The report, ordered by the Coast Guard, was being released today at a news conference on Treasure Island.

The initial low estimate was a key factor in the response of the early hours of Nov. 7, after the ship struck the bridge, tearing a 100-foot long gash in its hull. The report found that many Bay Area officials did not take the spill seriously because it appeared to be minor. [Language barrier played role in response to Cosco Busan spill, San Francisco Chronicle, Jan 28 2008]