This story, which is about the forcible rape of white female college students by black criminals, does not contain the words black or white. I guess they just don't think anyone would be interested in facts like that.

A group of college students was hanging out at a Mission Beach condominium in 2006 when they were attacked by several men who entered through an unlocked door, a prosecutor said Tuesday.

The University of San Diego students — two women and two men — were terrified by the intruders, who forced them to participate in sexual acts and stole items from the two-story condo.

Given the names of the alleged rapists, (Willie Louis Watkins, 32, Donald Duante Smith, 20, and Antonio Washington, 19) we might make a shrewd guess, based on our knowledge of differential naming conventions, at the race of the suspects, but reporter Dana Littlefield [Email him] and the Editors of the San Diego Union-Tribune [Email their readers representive] don't want us to know.

But here's a story that does contain this information, (and a photograph of the alleged rapists) because the judge is asking jurors if they're able to be impartial in a case like this: 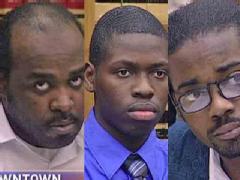 Fifty [prospective] jurors were being questioned at the San Diego County Courthouse on Thursday. Judge John Einhorn addressed the juror pool, saying that race is an issue because the defendants are black and the victims are white. The judge has been asking jurors if that would affect their ability to be fair and impartial in the case — can they concentrate on the evidence, not skin color. [Judge: Race An Issue In Mission Beach Rape Case, NBCSanDiego.com, January 24, 2008]

By the way, even when the Judge isn't channeling To Kill A Mockingbird, it frequently happens that local TV stations are the place to go for the information that the AP Stylebook says isn't pertinent. Even if they wanted to ignore the issue, they can't—they always have photographs of the suspects.