There was good news for President Trump on Tuesday, when another local government in California voted against the state’s sanctuary policy. 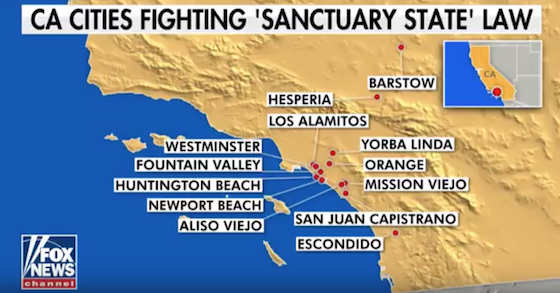 Governor Jerry Brown has become defensive about the uprising against his anti-sovereignty laws, appearing at the National Press Club to defend his radical globalism.

Fox reporter Griff Jenkins confronted the governor in the video above, making his point by using a preventable crime story as an example. It probably would have been better to use the Kate Steinle death at the hands of an illegal alien in San Francisco as a cautionary tale since it is better known. The admitted killer, the five-times-deported Francisco Sanchez, said in a jailhouse interview that he returned repeatedly to the city because he knew San Francisco was a sanctuary from immigration enforcement.

Here are more details of the San Diego vote:

The San Diego County Board of Supervisors voted 3-1 to support the Trump administration’s lawsuit against California over laws that the state passed last year to limit its role in immigration enforcement.

The county will file an amicus brief at the first available opportunity, likely if and when the case moves to a higher court on appeal, said Kristin Gaspar, supervisor for the county district stretching from Miramar to Encinitas and Escondido and chairwoman of the board.

The San Diego County supervisors who voted to support the lawsuit said for them, it was about public safety.

“We’re talking about people who are crossing the border illegally, coming into this county and committing a crime and them being let loose probably to commit another crime,” said Dianne Jacob, supervisor for the district that covers East County. “That creates a public safety issue and creates a problem in our neighborhoods.”

She worried about terrorists crossing the border illegally, she said.

During the announcement, Gaspar showed printouts of emails she received from each side of the debate. The stack of emails criticizing her for considering supporting the lawsuit was not much thicker than a legal pad. The stack of emails asking her to support the Trump administration’s legal challenge to California was well over a foot thick.

Cox said immigration issues need to be solved in Washington.

“The board’s vote is a largely symbolic move that will create fear and divisiveness in our region, waste taxpayer funds and create distrust of law enforcement and local government within many communities,” Cox said.

The Department of Justice filed the lawsuit against California at the beginning of March over three laws.

SB 54, the law that received the most publicity when it passed, allows officers to turn unauthorized immigrants over to federal immigration enforcement agencies only if they have committed crimes listed in the legislation. It says local police cannot participate in task forces that are focused on immigration enforcement.

AB 450 prohibits employers from voluntarily allowing immigration officials into non-public areas of the workplace unless the officers have judicial warrants. It also requires employers to notify employees about upcoming immigration inspections.