I just received in email a copy of a letter Samuel Gompers, an early president of the American Federation of Labor, and an "immigrant himself"—he was born in London. 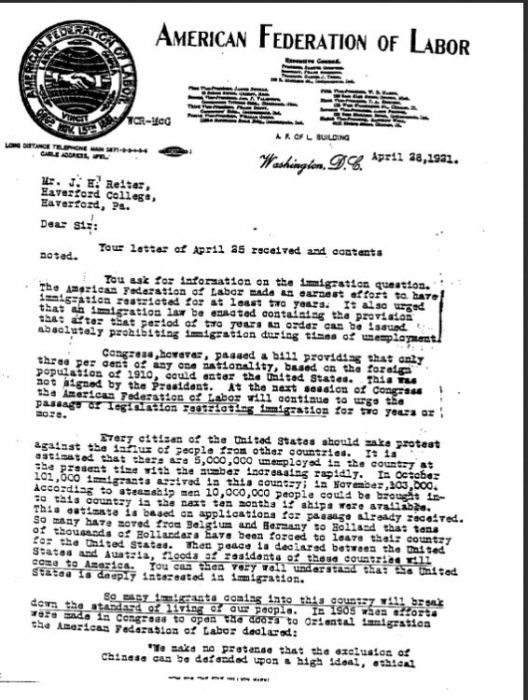 The letter was written before the Immigration Act Of 1924, and makes it clear that that was what Gompers was working towards. After discussing the prospects of legislation, he puts forward the "citizenist" position.

Every citizen of the United States should make protest against the influx of people from other countries. It is estimated that there are 5,000,000 unemployed in the country at the present time with the number increasing rapidly. In October 101,000 immigrants arrived in this country; in November, 103,000. According to steamship men 10,000,000 people could be brought into this country in the next ten months if ships were available. This estimate is based on applications for passage already received. So many have moved from Belgium and Germany to Holland that tens of thousands of Hollanders have been forced to leave their country for the United States. When peace is declared between the United States and Austria, floods of residents of these countries will come to America. You can then very well understand that the United States is deeply interested in immigration.

So many immigrants coming into this country will break down the standard of living of our people. In 1905 when efforts were made in Congress to open the doors to Oriental immigration the American Federation of Labor declared

''We make no pretense that the exclusion of Chinese can be defended upon a high ideal, ethical ground, but we insist that it is our essential duty to maintain and preserve our physical condition and standard of life and civilization, and thus to assure us the opportunity for the development of our intellectual and moral character. Self-preservation has always been regarded as the first law of nature. It is a principle and a necessity from which we ought not and must not depart.''

Shutting out from our shores the poor of other nations and races is caused by the law of necessity and self-protection consequent upon our industrial system. Labor does not desire to erect a wall around our country and prevent the poor of other nations from entering. It does declare that America is for Americans alone, but it does insist that there should be and must be some restriction of immigration that will prevent disintegration of American economic standards.

Those who favor unrestricted immigration care nothing for the people. They are simply desirous of flooding the country with unskilled as well as skilled labor of other lands for the purpose of breaking down American standards. You must not forget that if low wages, long hours of employment and unbearable working conditions are signs of prosperity China and India would be the greatest commercial and industrial countries in the world. They have no strikes in China. It is the Utopia of the ''open Shop.'' America, however, where men are free to voice their desires for greater and still greater advancement in economic conditions, is the greatest country on earth. Its people live better than anywhere else, and the trade unions are responsible for maintaining those standards. Those who believe in unrestricted immigration want this country Chinaized. But I firmly believe there are too many right-thinking people in our country to permit such an evil. Very truly yours, (s) Samuel Gompers President, American Federation of Labor

Contrast that with the attitude of the AFL-CIO today.