Justice has finally been served now that an illegal alien murderer who terrorized part of Montgomery County with worsening home-invasion robberies has been sentenced to life with no parole.

The killer, Jose Garcia-Perlera, preyed upon elderly women living alone, and became acquainted with at least one victim by working as a handyman in her home (never a good idea). That woman, Ann Wolfe, had been tied up for two days until her daughter found her. She later reported, "He was a deliberate planner. He worked at my house for six days, a year and a half before [he attacked]... He remembered me and stalked me. He is a very, very dangerous man." 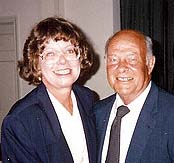 Mary Frances Havenstein, 63, was found beaten to death in her bedroom in Bethesda. She is pictured here with her husband Paul in 2000.

The police caught the killer because of a stolen computer he had left at a local pawn shop. Officers then searched Garcia-Perlera's home, where a treasure trove of stolen swag was found. One unmistakable item was the Mercury space mission medallion kept by Mary Havenstein as a keepsake of her late husband who had worked on the project.

In the Washington Post article, the killer was initially identified as "a Hyattsville man," and the paper only later mentioned his immigration status and how he came to be present in America to commit a series of violent crimes.

In a report submitted to [Judge Michael] Mason, which the judge said he would make part of the case file, Delgado described Garcia-Perlera's poor upbringing in El Salvador, where he studied to be an electrician. About 2000, Garcia-Perlera left with a friend to walk to the United States. He was caught after crossing the border illegally but was set free pending his immigration removal hearing, according to Mason and immigration officials.

Garcia-Perlera did not show up for the hearing, officials said, and worked briefly in Texas. He met a woman who bought him food and a bus ticket to New York, Delgado wrote in his report, and lived in Queens, picking up work at a restaurant.

Garcia-Perlera also picked up an arrest warrant for a burglary, according to prosecutors, and left for Maryland. Once in the Washington area, he worked as an electrician and handyman. He briefly worked in Wolfe's home in Potomac.

His attacks escalated in violence. He entered Havenstein's Bethesda home in September, and a relative found her body when she arrived to pick her up for a medical appointment. Havenstein's phone lines were cut. Medical examiners were not certain when she died.

"She died a terrible death," State's Attorney John McCarthy said in court. "She was helpless on that floor, beaten, broken, no phone.... Did she last an hour? Two hours? Did she last a couple of days?"

As the home invasions spread, residents grew more concerned. About 700 turned out for a community meeting in the weeks after Havenstein's death. [Man Gets Life Term For Vicious Attacks, Washington Post, August 14, 2009]

As is so common in these cases, the legal system was not serious about holding and punishing a foreign criminal. The media spin is that he got away from a previous brush with the law: Home invasion, murder suspect escaped from N.Y. police in 2000, officials say. What happened is the illegal alien was released on bond in a burglary case and left town. What a surprise.

Here's a recent video report about the trial outcome (Man Who Attacked Elderly Women Sentenced to Life in Prison):