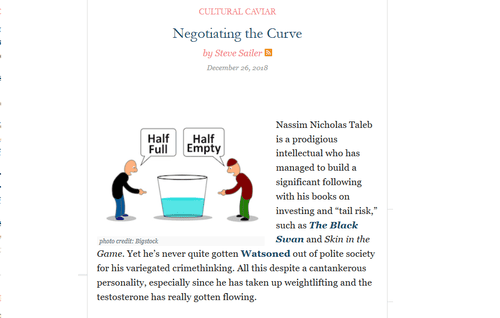 Sailer vs. Taleb In Takimag: "Negotiating the Curve"

Nassim Nicholas Taleb is a prodigious intellectual who has managed to build a significant following with his books on investing and “tail risk,” such as The Black Swan and Skin in the Game. Yet he’s never quite gotten Watsoned out of polite society for his variegated crimethinking. All this despite a cantankerous personality, especially since he has taken up weightlifting and the testosterone has really gotten flowing.

Born in Lebanon to a ruling-class Christian family that was hurt by the horrific civil war of 1975–1990, Taleb, constantly worrying about what could possibly go disastrously wrong, is by nature a man of the right.

In contrast, Taleb’s intellectual archrival, rock-star Harvard psychologist Steven Pinker, an optimist who believes that every day in every way the world is getting better and better, would appear to be innately a man of the left.

But things are more complicated than that. Pinker, for example, is an outspoken advocate of the politically incorrect science of IQ and heredity.

And here are some Twitter exchanges from after I sent in my Taki’s essay early Christmas Eve morning:

This is a reasonable point.

On the other hand, most IQ tests are validated for the 95% of the population between 70 and 130. The 2.5% above 130 could be targeted by a special test, but it's probably better just to let the 160 and 175 IQ physicists see who wins the Nobel. https://t.co/wnuORpD9lO

For last few decades, US Army/Marines have seldom allowed to enlist recruits with AFQT score equivalents of <92 IQ. During recent recession, Air Force and Navy only took 100 IQ or above. Within those ranges, lower scores tend to get jobs like truck driver, higher avionics tech. https://t.co/JcKt5cH53u

I'm sure Dr @nntaleb is correct about certain situations involving >130 IQ Wall Street quants where IQ is no longer a useful predictor. But, let's not throw out the baby with the bath water. The IQ usefulness glass tends to be at least half full, which is more than most factors. https://t.co/u7GRF0UIRr

La Griffe just accepts, for sake of argument, Gaussian distributions, including at tails, and derives all sorts of real world predictions.

Here is a link to La Griffe du Lion’s essays. La Griffe is kind of the anti-Taleb, showing just how much insight into current affairs you can wring out of the basic concept of the bell curve.